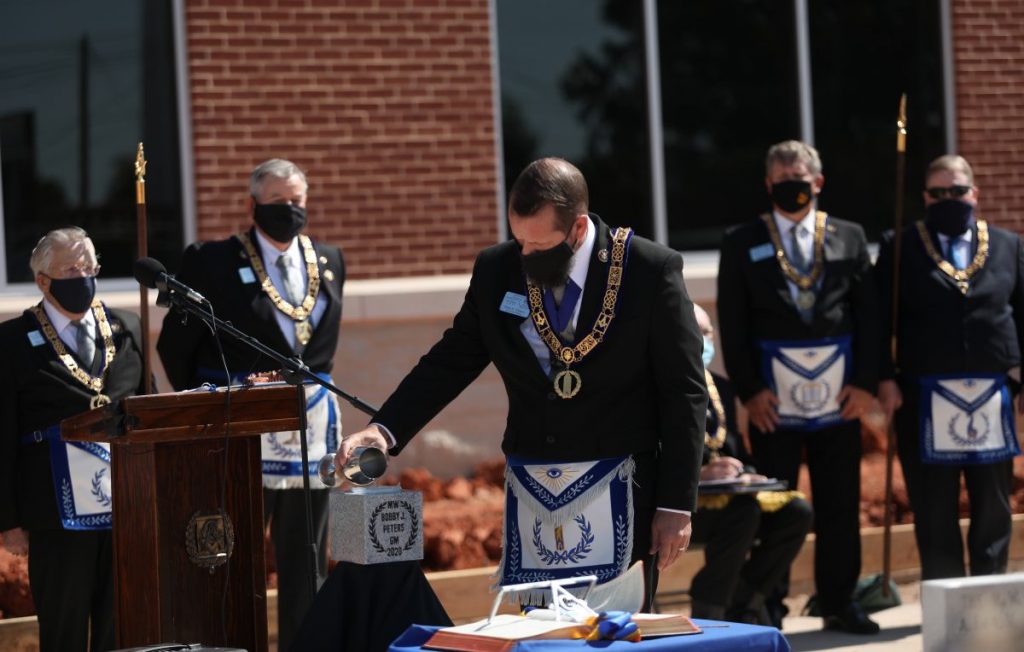 Glen Chaney, junior grand warden , pours oil onto a stone during a Masonic ceremony on Oct. 5 dedicating the cornerstone for the new Del City Library. (Photo by Jeff Harrison) 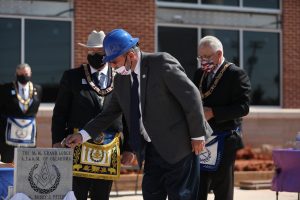 Del City Mayor Floyd Eason spreads cement on the cornerstone to symbolically set the stone during a ceremony at the new Del City Library on Oct. 5. (Photo by Jeff Harrison)

Local Freemasons and the Grand Master Mason of Oklahoma conducted a centuries-old ceremony last week as they dedicated the cornerstone of the new Del City Library.

Masonic representatives and local dignitaries attended the Oct. 5 ceremony outside the library construction site at 4330 SE 15th Street.  The new building is expected to be completed at the end of the year, and open in the spring.

Masons shared the history of the organization’s role in architecture and later education and philosophy. Their tradition in dedication of public buildings continues today.

The masons took turns using the ancient tools of the square, level and plumb to symbolically level the cornerstones.  They then poured the elements of consecration – corn, wine and oil on the stones. These items represent nourishment, hope and joy.

They later invited dignitaries to join them to spread cement to symbolically set the stone. Mayor Floyd Eason, City Manager Mike Cantrell, Cheryl Ford, Del City Chamber of Commerce, were among those who took part in the ceremony. 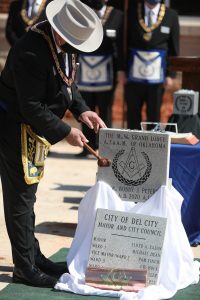 Grand Master Bob Peters of the Grand Lodge of Oklahoma
taps the cornerstone during a ceremony at the new Del City Library on Oct. 5. (Photo by Jeff Harrison)

They finished the ceremony by tapping the stone with a ceremonial mallet.

Eason thanked the Masons for their service and ceremony.

“This building will serve the citizens of Del City for many generations to come and I’m excited that we’re close and excited to see it open,” he said. “Thank you for coming out and providing this service and the cornerstone. We really appreciate it.”

Grand Master Bob Peters was grateful to Del City leaders for allowing them to perform the ceremony.

In addition to the cornerstone ceremony, the Masons also presented a time capsule to be buried beneath the cornerstone. It included a list of the members of the Del City Masonic Lodge 5036, information about Masonry in Oklahoma, pins, an American flag, a newspaper, and other things.

The 15,000-square-foot library, located at 4330 SE 15th Street, is just a short walk from the current library inside the community center. The new facility will be more than twice the size of the current one. It will have separate areas for children and adults, a large computer area, meeting rooms, a drive thru drop-off area, among others.