Midwest City police arrested one person and are looking for another suspect in separate shootings last week. 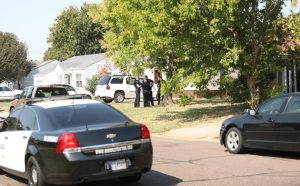 Police investigate a shooting in the 300 block of Douglas Dr. on Oct. 8. (Photo by Jeff Harrison)

About 11:45 a.m. last Thursday, police were called to the 300 block of E. Douglas Dr. about a shooting and domestic disturbance. According to an arrest affidavit, 27-year-old William Dale O’Hagan allegedly got into an argument with his girlfriend and started assaulting her.  A relative heard about the incident and came over to the house.

O’Hagan allegedly threw a heavy drinking glass at the man when he came inside the house, which cut his arm. The two men got into a scuffle on the floor and O’Hagan reached for a gun and shot the man in the right thigh, breaking his femur. The victim was transported to a local hospital and O’Hagan fled the scene, according to the report.

The next day, O’Hagan turned himself in at the Midwest City Police Department. He said he woke up a in a bad mood and admitted to arguing and slapping and shoving his girlfriend. He also allegedly admitted to throwing a glass at the second victim, who had a pipe in his hands, when he came into the house and later shooting him during the scuffle. He said he threw the gun out of the car window near SE 29th St. and S. Douglas Blvd., the report said.

Midwest City police were also investigating a shooting that took place outside Steak and Shake, 7181 SE 29th St. on Oct. 5.

Police were called to the scene about 6:30 p.m. about shots fired in the parking lot. Witnesses said two men got into an argument in the parking lot and one shot the other. The victim was transported to a local hospital and the suspect fled the scene, police said.

According to a probable cause affidavit, police have identified a 17-year-old suspect but have not made any arrests as of press time Monday.