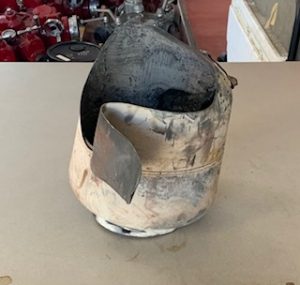 A popular summertime activity is a thing of the past.

City ordinance prohibits open flame cooking devices within 10 feet of combustible construction, including balconies made of wood or other natural products as well as vinyl siding or other flammable coverings.

Midwest City will issue citations for any open flame cooking devices observed in apartments and duplexes. All citations will be issued to the owner or manager of the apartment complex. A citation will cost about $311.

Fire Marshal Duane Helmberger sympathizes with those who enjoy outdoor grilling, but says it presents a serious fire hazard to individuals and those living in the complex.

“When you’re living in a commercial occupancy building, the issue is if you mess up it can affect four, six, eight or more families,” he said.

Helmberger said outdoor grilling at apartment complexes has always posed a risk but the ordinance had not been enforced in the past.  A recent fire at Meadowood Village Apartments in the 6200

Midwest City is not allowing any outdoor cooking devices at apartments and duplexes. (Photo provided)

block of E. Reno Ave. sparked action from the city. Firefighters were able to quickly contain the fire on one of the balconies. A propane tank that was sitting on the balcony exploded and further fueled the fire. Fortunately, no one was injured in the explosion.

“The propane tank did not cause the fire, but it was one of the reasons that it got as large as it did,” Helmberger said. “If we got there two minutes later, it might not have been a good outcome.”

The ordinance prohibiting outdoor cooking devices is included in the 2015 International Fire Code. Several municipalities, including Midwest City, have adopted the fire code.

The fire department issued notices about the new policy on Oct. 14. The new policy went into effect on Oct. 23.

“Many of the apartment managers and owners that we talked to said they already had this policy in their lease agreements,” Helmberger said.

Helmberger also warned that enforcement of the ordinance will be ongoing.

“We’re going to actively push this, and it will be on everyone’s radar,” he said. “It’s not going away because we can’t afford for this to be a contributing cause in the future.”