A historically early ice storm struck the area last Monday freezing trees that were fully covered in leaves, resulting in falling tree limbs throughout the community.

As a result, a record number of OGE customers were out of power last week, and some still remain without power this week.

In all, hundreds of thousands lost power last week and many are still waiting for their service to be restored. 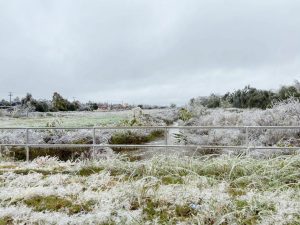 Gov. Kevin Stitt declared a state of emergency in 47 of the state’s 77 counties, and Choctaw mayor Randy Ross followed for the widespread damage in this area.

The state’s largest utility system, OGE Energy Corp., said Thursday that the widespread power outages were the worst in the utility company’s history.

“This is probably the most severe storm we’ve ever had on our system,” said CEO, Chairman and President of OGE Sean Trauschke. “We probably had in excess of 500,000 outages.”

OGE has about 858,000 customers in Oklahoma, according to their website.

OGE serves the Choctaw area, but they weren’t alone in widespread outages as crews from other states rushed to Oklahoma to assist in restoring power.

At the time of this report, Oklahoma Department of Emergency Management Director Mark Gower said the number of injured had not been tabulated. Officials are waiting for the state medical examiner’s office to determine whether there were fatalities attributable to the storm.

Cleanup remains a major concern in Choctaw as almost every tree lost limbs. 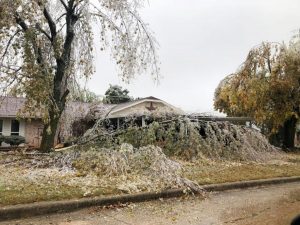 City officials say the city does not have the resources or personnel to handle a disaster of this magnitude.

“We do not want to promise something right now the city cannot deliver.  Our initial very rough estimate is $3 million conservative to pick up from curbside with a contract.  We cannot commit the city financially to a blanket solution of picking up curbside until FEMA declares a disaster.”

The city is now advising residents to make limbs 10 foot in length or less and place a the curb, but expect several weeks until a plan can be developed.