Midwest City had a chance to get in the driver’s seat in the District 6A-II-1 standings on Friday night.

But Stillwater left them in the dust.

The Bombers (5-2, 4-1) spent much of the night chasing Stillwater running back Qwontrel Walker and never got their offense rolling in a 31-10 loss at Jim Darnell Stadium at Rose Field.

“They just outplayed us tonight,” said coach Darrell Hall. “I thought our defense played pretty well, but on offense we couldn’t figure out what to do.” 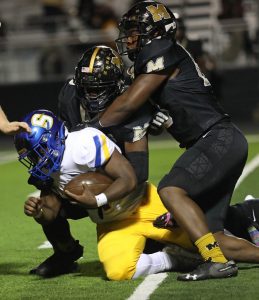 Walker rushed 43 times for 284 yards and four touchdowns in the pivotal district contest. The senior topped the 7,000-yard career mark during the game.

The Pioneers (7-0, 4-0) can clinch the district title Friday night with a win over Putnam City North.

Midwest City’s regular season is likely over. They are scheduled to host Northwest Classen on Friday night, but Hall believes the game will likely be canceled. The Knights have forfeited all but two games this season.

“If they want to play, we’ll play Friday right here,” Hall said. “If not, we’re off until the playoffs.”

After a scoreless first quarter, Stillwater broke the silence early in the second. Walker scored from one yard out for a 7-0 lead with 11:15 in the second.

Midwest City looked to gain momentum after a fourth-down stop near midfield. But they soon found themselves in the same position. The Bombers went for it on fourth down, but DeAngelo Irvin Jr. was sacked at his own 46.

The Pioneers took advantage of the good starting field position with their second score of the night. Walker carried several times on the drive, finally getting to the end zone on a 3-yard run. That put Stillwater up 14-0 with 2:58 in the half.

A fourth down miscue by Stillwater set up the Bombers only points of the half.

Midwest City got the ball on the Stillwater 21 after the Pioneers mishandled the snap on a punt. The Bombers couldn’t put the ball in the end zone but got a 25-yard field goal from Eljah Escobar.

Midwest City continued to get stops in the third quarter. Running back Kristawn Friday fumbled on his own 21 but the defense held Stillwater to a field goal, making it a 17-3 score.

The Bombers again moved the ball across midfield with a big catch by Andre Miles and a costly penalty from Stillwater. But the drive sputtered and ended with an incompletion on fourth down.

Quarterback Caleb Allen broke a 32-yard run down to the Midwest City 6. Walker then punched it in for his third touchdown of the night and a 24-3 lead early in the fourth.

Midwest City score their only touchdown in the fourth quarter. Irvin guided them down field with passes to Brian Wilson Jr. and Brandon Wright before hitting Dylan Sebock across the middle for a 23-yard gain down to the 2.  Irvin then scored on a keeper to make it a 24-10 score with 5:42 remaining.

Walker answered with his fourth and most impressive score of the night. After Midwest City could not recover an onside kick, the Pioneers took over across midfield. On second down, Walker broke a 44-yard touchdown run for a 31-10 lead.

The Bombers could not score on their next possession and Stillwater ran out the clock for the win.

Irvin was 14 of 27 passing for 151 yards with one interception, while often under duress in the pocket. He led the team with 32 yards rushing.

Wilson led the team in receiving with 6 catches for 69 yards.

The loss was the Bombers’ lowest scoring game of the season. They had combined to score 88 points in their previous two wins over Deer Creek and Putnam City North.

LeJaylin Long-Jackson led Midwest City with 11 tackles and 1 sack.  Smith had 10 ½ tackles including 1 for loss and 2 pass breakups. Arthur Broiles added 9 ½ tackles and Wright had 7 stops.

Hall was not pleased with the overall effort and focus from his team and hopes they can get another shot at Stillwater in the postseason.

“Some of our guys played well, tremendous effort and played lights out, and some played like they were afraid of the moment,” Hall said. “We need to get through this and hopefully we’ll see those guys again in the state championship game because we’ll be in the other side bracket.”