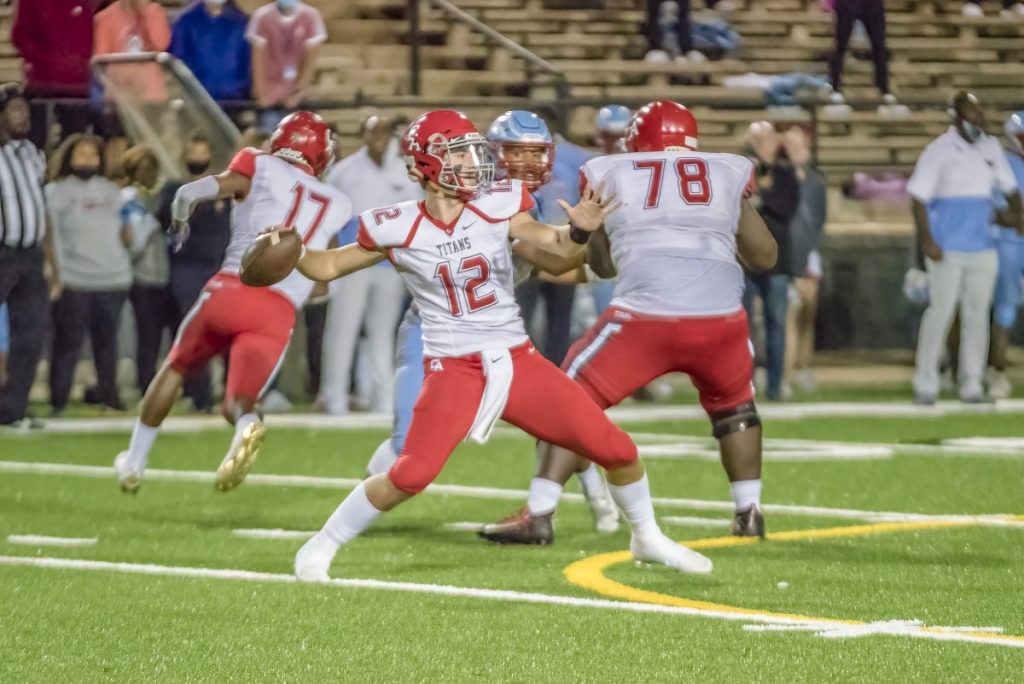 LAWTON – Ben Harris had his 50th consecutive start as the Titan quarterback, continued his mastery over Lawton Ike Friday night, leading Carl Albert to a rather pedestrian 31-0 victory over the Eagles at Cameron Stadium.

In his four-year career against Lawton Ike, Ben has enjoyed 49-0, 56-8 and 62-0 wins while guiding the Titans to a 48-2 record and back-to-back Class 5A State Championships.

“It was quite a bit different from when I played my first varsity game here against Lawton High in 2017. I have always trusted my teammates to follow the coaches’ instructions and it helps for all of us to be on the same page. I’d like to think I have improved, grown some and gained valuable experience over the past four years.”

Harris’ first start as a varsity freshman also took place at Cameron Stadium in 2017 when the Titans outlasted the Lawton Wolverines, 33-32, when a late Lawton TD was followed by a botched PAT and then an even more botched on-side attempt that Rabbit Taylor recovered.

Ben proved he was wise beyond his years as he established a superb working relationship with Taylor, who picked up 245 yards rushing and scored three touchdowns. Taylor is now at Texas Tech.

This was before the Jacob Eddy Era and Ben Carlson had two field goals.

Eisenhower has never provided much opposition for Ben and Co. as the Titans have scored lopsided victories in the past three years.

The next year at Cameron Stadium, Ben only played the first half of the 53-6 triumph. He was 5 of 6 to A. J. Davis for 130 yards and three touchdowns. A two year pattern developed with David Peters and Riece Collier dominating the defense as Ike didn’t register a first down while the ace linebacking duo was in the game.

In 2019, Collier had a pick-6 for a TD, Ben was 7 of 9 with a TD to Cobe Crews and Collier, Peters and the boys limited the Eagles to 54 yards while they were in the game.

Friday night, Ben completed 14 of 18 passes for 105 yards and a 26-yard TD to  Tashawn James. Javion Hunt carried the ball 13 times for 120 yards and two touchdowns.

In the first quarter, CA forced the first of 11 punts and a Harris to Cobe Crews for 10 yards set up the Titans famous Dax Swanner to Houston Russell to Jacob Eddy for a 25 yard field goal that was all the points that CA would need with its defense on a rampage.

Kentrell Bizzell came up with a sack and a fumble recover to thwart an Ike drive and on the next possession, the Eagles punted to Lamereon Curry. Big mistake!

The speedy Titan junior took the ball on his own 38, headed for the CA sideline, picked up a couple of blocks then ran through and around the would-be tacklers from Ike and zoomed 62 yards to paydirt.

“I knew if I could get to the edge, I would have a chance down the sidelines. I had to run over a couple of them but worked out perfectly. Eddy added the PAT for a 10-0 advantage.

But Combs and Dobson weren’t through combining to force a punt which sailed out of bounds at midfield with less than a minute left on the clock till halftime.

Hunt gained four then burst behind a combo block by Zy Moore and Corey O’Hagan and zipped 41 yards to the four. He scored on the next play with two seconds left in half for a 17-0 lead.

Harris limbered up his arm to start the second half and sparked a 65-yard drive, culminate with a 26-yard TD toss to James.

Dobson, who says he enjoys playing both ways as does Combs, led the defensive charge that resulted in a short and Harris handed to Hunt for the 5-yard touchdown before Coach Mike Corley called or he reserves.

NOTE: The Titans have a play-in round bye but will home on Nov. 21 to host the winner of the first-round battle between Woodward and Ardmore. A win there would set up a home tilt against No. 3 ranked Tulsa Kelley which will have to get by the Tahlequah-Edison winner to gain a ticket to Gary Rose Stadium.