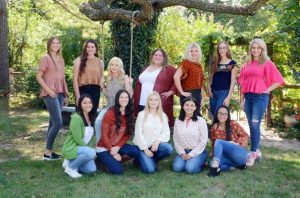 The Business Women’s Club has had to cancel their pet clinics as well as several events for the Girls of the Month.  All of the girls are chosen from Choctaw High School Seniors and scholarships are awarded.

The girls do philanthropic work all year and write an essay at the end of the year.

They are planning to choose the “Girl of the Year” before school is out in April 2021.

Last year the banquet was delayed until July due to the Coronavirus.  Also many of the fund raising events were unable to be held but the personal sponsors and many businesses donated to the Business Women’s Club and the scholarships were able to be presented.  It is hopeful, things will be better this year and the event will be held the later part of April.

A special thanks to Mandy Barlow for the above information.

For more information on other events during the year, contact President Patsy Boyer at 405-615-5855.