The Carl Albert Titans’ quest for a fifth consecutive OSSAA Class 5A State Championship moved one step closer Friday night at Gary Rose Stadium with a 49-14 romp past Ardmore in the state quarterfinals.

The District Champion Titans will be at home Friday night against Bishop Kelley, a private school from Tulsa which will bring a 9-1 record into the fray and the No. 3 ranking in the state in Class 5A.

The Comets’ only loss was to Coweta, 42-27, and Coweta is No. 2 behind the Titans in the rankings. 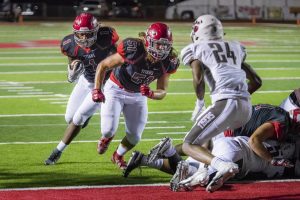 A victory by the Titans would send them to a neutral site (back East somewhere because of the rotating schedule) against the winner of No. 3 Collinsville and Guthrie.

Some papers back East had Kelley ranked No.1 after the Titans’ loss to Bixby and also had Coweta ranked ahead of the Titans. But the games are played on the field, not in newspaper columns.

FRIDAY NIGHT, the Titans looked a little casual after their bye week as Ardmore took the opening kickoff at the 27 and marched 73 yards in 14 plays, eating up almost 9 minutes off the clock. Jalen Cohee scored on a 16-yard reverse and Randy Vargas gave the Tigers a 7-0 lead.

But it didn’t last long as Mason McNeil delivered a big hit and Nathan Mooney pounced on a short kick, giving Ben Harris and Co. the ball on the 42. Gentle Ben connected with Cobe Crews on 16, then 12 yards, then Houston Russell for 14 and after Javion  Hunt gained 13 to the one, he plunged over for the TD and Dax Swanner to Russell to Jacob Eddy produced the first of 7 PATs and the score was tied.

But not for long as Crews slapped down a pass and Keyon Dickerson sacked the quarterback and Ezra Gustafson and Kentrell Bizzell combined to stop a fourth down and Harris was in business just  65 yards from the goal.

A 21-yard pass to Crews and three carries by Hunt brought it to the 18 where Harris faked into the line, then pitched to Hunt off the option and the speedy Hunt hit paydirt and it was suddenly 14-7 after the automatic PAT.

Crews then demonstrated his defensive skills, pulling down an Ardmore pass to give CA the ball on the 40. A 16 yard beauty to Russell set up a typical speed, power, more speed, cutback and head for the pylon, which Hunt did from 44 yards out and with 2:45 left in the half, it was 21-7.

A combo sack by Dickerson and Mooney quickly brought up fourth down and Harris got it back on the 24 after Lamereon returned the punt 26 yards. Harris found Crews for 10, then 5, then 14 (after a five-yard penalty) and with 36 seconds left, it was 28-7 as the dejected Tigers slowly made their way to the dressing room, resisting the temptation to pile onto their bus and go home.

The second half began with a 15-yard penalty that shoved the ball back to the 13, 87 yards from paydirt. Which doesn’t seem so far after Harris and Crews hook up for a 52-yard dazzler, then Harris scrambled for 6 and Hunt added 7 to the 17.

The next play brought the crowd to its feet as defensive standout Caleb Zangari ran a crossing patter from his tight end slot, gathered in a bullet from Harris at the 10 and bulled his way into the end zone for his first TD of the year. That made it 35-7 and that bus was looking inviting to the Tigers.

But after Cohee scored again for the Ardmore boys, Harris completed his third TD of the night, this one a four-yarder to Russell and Bizzell wound up the scoring with a 24-yard scamper before Brayden Armstrong and Luke Stout took over.

The Tigers appeared to be headed for another TD against Titan reserves until Jackson Holland stepped in front of an Ardmore pass for his second Oskie of the season and enjoyed a riotous reception when he returned to the sidelines.