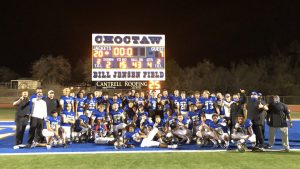 THIS IS OUR HOUSE: The Yellowjackets celebrate a round two playoff win over Putnam North at Bill Jensen Field. (PHOTO BY RYAN HORTON)

“This is our house, this is our house,” repeated the chant from the Choctaw High School student section Friday night as the Yellowjackets ran out the clock to capture a 20-7 win over Putnam City North in the Class 6A-II state quarterfinal.

The Yellowjackets swarmed to defend the nest successfully against all opposition this season.
Choctaw made history defending Bill Jensen Field for an unprecedented seven times.

Making history by going 7-0 at home, Choctaw advanced to the state semifinal for the second straight year.

After only falling to top-ranked Bixby in district play, Choctaw was set to host two playoff games.

Challengers passed on playing the Jackets in round one so Choctaw took a bye that could have further extended the prestigious home field record.

The state quarterfinal win was Choctaw’s fifth ever against the Panthers, and the second for head coach Jake Corbin who has gone 2-2 with PC North in the last four years.

In a test of two of the state’s best defenses, Choctaw dominated.

Now the Jackets advance to face Stillwater in a state semifinal contest for the second straight year.

Kickoff is set for 1 p.m. Saturday at Owasso High School. 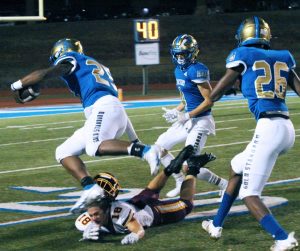 The Yellowjackets made history defending Bill Jensen Field for an unprecedented seven times.

Making history by going 7-0 at home, Choctaw advanced to the state semifinal for the second straight year.

Additionally, the win was Choctaw’s fifth ever against the Panthers, and the second for head coach Jake Corbin who has gone 2-2 with PC North in the last four years.

In a test of two of the state’s best defenses, Choctaw dominated. 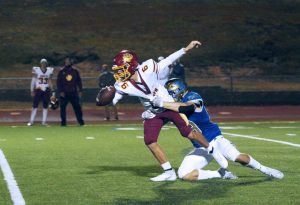 Donnie Wingate slides in to throw down the Putnam North quarterback during one of many sacks Friday.
(PHOTO BY RYAN HORTON)

“We knew we’d have to win on the defensive end,” Choctaw coach Jake Corbin said. “We knew we had our hands full, but I’m really proud of how we did.”

“A playoff win, at home, and now we’re 7-0 on our field. This is a huge accomplishment for our program and seniors,” said Corbin.

“I’m really proud of our defense. From the jump, they just continued to be super stingy. Mukes did fantastic. They have a big-time receiver and we have a big-time corner. He was tested all night, and that kid got no receptions. That’s a pretty good job as a corner.”

With the win, Choctaw advances into a state semifinal rematch from last year against Stillwater.

And in the history making theme of the Corbin era, the Jackets will be practicing on Thanksgiving Day for the first time in nearly 60 years.

Choctaw (8-3 overall) finished second in the east 6A-II district despite claiming the most wins after stumbling against Bixby, which has won 34 straight games. Top-ranked Bixby was the only in state loss for CHS as their other defeats came by undefeated Greenwood, Arkansas (11-0) and the season-opening loss to an Arkansas team that was heavily affected by COVID-19 quarantine measures.

Midwest City will be facing Bixby in semifinal action, while CHS takes on the Pioneers who are looking for a third straight state final appearance.

Corbin said his offense was opportunistic and ran the ball well on PC North.

While Wasel scampered along with speedy running backs for big plays and three touchdowns, he credited the stacked CHS receiving corps for successful drives on a top-tier defense.

“Nobody’s receivers are as physical as ours,” Wasel said.

Standout sophomore tight end RJ Jackson returned to action after going out with injury in week five. He picked up right where he left off putting in 115 yards on five receptions.

Terrill Davis had five receptions for 72 yards of offense, while a swarm of other receivers kept the defense overwhelmed.

By the end of the night, CHS had 185 yards passing and also stacked on 158 rushing.

Choctaw got out to a quick two-score lead after La’Trell Ray and CJ Smith each ran for touchdowns.

With the bye week in round one of the playoff Choctaw had time to get in extra practice, and get the deep roster healthy. Now CHS is looking forward to practicing on Thanksgiving Day for the first time since the early 1960s.

“We prepared very well for two weeks for this game, and it went just like we planned. We have a bunch of defensive coaches that give us the technique and we’re out here working every day. We are very aggressive on defense and that’s what really makes us. No one is slow on defense; ‘Speed D’ is what we call it,” said senior Chris Parker. “We’ll be going hard at practice getting ready for Stillwater. We’ll go into that game with the same mindset, we want the W every week. We’re state champions, and that’s what we’ve told ourselves all year. That’s what we’re working toward. We’re 1-0 now, and next week we’ll be 1-0 again looking at that state championship.” 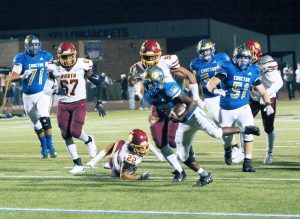 The Jackets look on as La’Trell Ray eyes the end zone as he breaks a Putnam North tackle in Friday’s state quarterfinal. (PHOTO BY RYAN HORTON)

The state semifinal vs. Stillwater is set for 1 p.m. Saturday, Nov. 28 at Owasso High School. 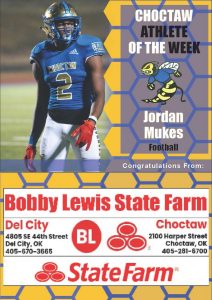