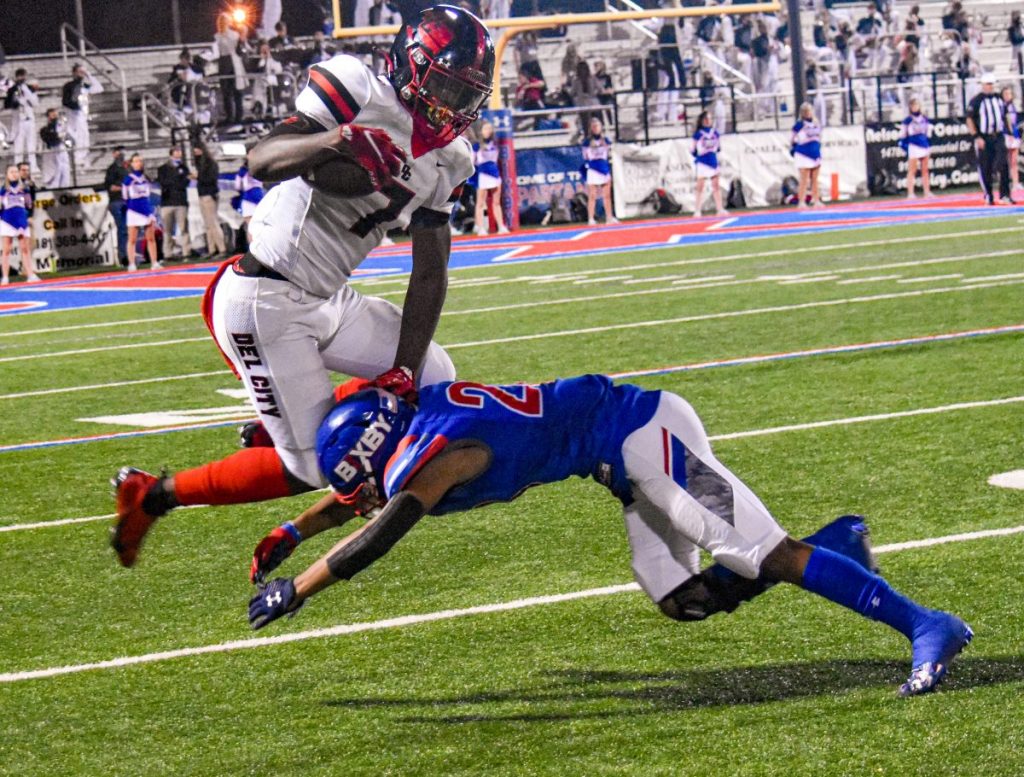 Del City faced a tough match-up Friday night. The Bixby Spartans are ranked number 1 in the state and number 40 nationally.

The Spartans came out like a well-oiled machine scoring early in the quarter with a 19-yard rushing touchdown by Braylin Presley. Del City struggled in the opening quarter, where they only got one first-down.

Bixby closed the quarter with a 17-yard rushing touchdown by Mason Williams. To further cement the lead the Spartans Jersey Robb rushed for a 2-point conversion. At the end of the first quarter Bixby was up 21-0.

Early in the second Williams completed a 24-yard pass to Beau Bertelli for a Spartans touchdown. Del City was able to force a three and out for the first time later in the quarter.

On Del City’s next possession Devonta Owens intercepted a pass placing Bixby on their own 29-yard line. The Del City defense stopped Bixby from scoring off the interception.

The first half ended as Presley scored a 3-yard rushing touchdown. At the half the Spartans had a lead of 42-0.

Going into halftime the Eagles were looking rusty but coming into the second half they began playing like themselves. 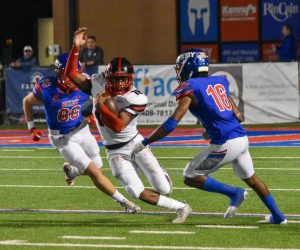 In the second half of play the Spartans scored three touchdowns while the Eagles scored four touchdowns.

At the start of the third Williams threw a 17-yard pass to Presley for Bixby’s first touchdown of the half. On the Eagles first possession they responded back with a score of their own. Their first of the game.

With Ja’kheo Mitchell going down with injury Del City moved senior Jahkobie Smith to quarterback. Smith began the season as starting quarterback but moved to running back mid-season when Mitchell took over.

Smith back at the head of the Eagle offense threw a 20-yard touchdown pass to Donovan Stephens to get Del City on the board. With a minute left in the third quarter Smith converted for a 5-yard rushing touchdown.

At the end of the third quarter the score was 56-14. The Eagles were fighting back.

Despite being down Del City kept fighting until the final second, scoring twice in the final quarter while Bixby scored once more.

Del City looked determined to finish the game out strong. With two minutes left in the game Dkalen Godwin threw a 43-yard pass to Sherrod Davis for an Eagle touchdown.

Though the Eagles lost the game they never stopped fighting. Their fighting spirit is what defined this Del City team. Despite their early struggles they never gave up and finished with a 6 – 4 record which is better than preseason predictions.

This season the Del City Eagles continued to surprise and overcome. They kept pushing themselves and striving for greatness. Though their season is now over the Eagles will return next season as resilient and strong.

The Spartans will face the Midwest City Bombers (8-2) Saturday night in the 6A-ll state semifinals at Jenks.