With one second remaining on the play clock, sophomore kicker Tommy Yousey drilled a 25-yard field goal to put Choctaw High School ahead of Stillwater, 38-35, as time expired in the Class 6A-II semifinal Saturday at Owasso Stadium.

Choctaw is now set to make their first state championship game appearance since 1960.

Choctaw (9-3) advances to the 6A-II title game and will play Bixby, which defeated Midwest City in Saturday’s other semifinal matchup, at 7 p.m. Dec. 5 at the University of Central Oklahoma’s Wantland Stadium. 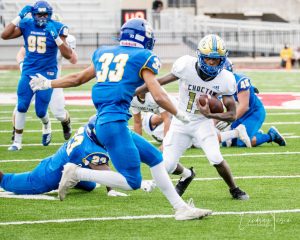 Choctaw has only made a state title game once, and 60 years ago the Yellowjackets claimed the school’s lone gold ball in Class B.

With the semifinal victory, the Jackets got some revenge on the Pioneers after facing Stillwater in a state semifinal game for the second straight year.
Stillwater (8-1), which defeated Choctaw 62-12 in last year’s semifinals, was trying to reach the state final for the third year in a row.

Choctaw claimed their third ever win over the Pioneers improving to a 3-18-1 record in a series dating back to 1972.

Stillwater managed some big passes to Ty Smithton, while Qwontrel Walker had 176 yards and two touchdowns on 28 carries.
However, Choctaw’s top-tier defense didn’t allow much more and gave the Jacket offense time to find a successful rhythm.

Choctaw’s defense, which had nine sacks on the day, again dominated with a 3-and-out giving the Jacket offense the opportunity to win in regulation.

The Jackets worked fast as momentum was building on Choctaw’s side of the field.

La’Trell Ray dashed 47 yards to the 20-yard line on the first play of the drive. Then Steele Wasel , who went 23-of-30 for 268 yards and two TDs, threw a quick 20-yard rocket to Jax Burchett, who made the diving catch five yards outside of the end zone. Stillwater’s defense was scrambling, but the Jackets were able to get a time out called with one second left, setting up Yousey on the left hash mark. 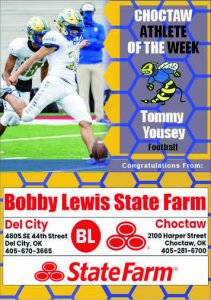 Yousey was nervous as he saw the Jackets move into position for the biggest kick of his life.

“Very nerve racking. This feels great. My team won, and that’s all that matters,” said Yousey.

The sophomore has been kicking for three years, and he was coming off of what may have been his most disappointing game so far to win one of the biggest games in school history.

“Tommy Yousey is tough as nails. It didn’t surprise me one bit putting in his hands. The guy is a stud,” said CHS head coach Jake Corbin.
“I told him on Thursday, this is going to come down to him kicking a game-winner. Fast forward 48 hours later, and that’s the case. He was able to get it done. I have full confidence in him.”

As the team gathered on the field, his teammates were chanting his name as they celebrated the school’s second ever state semifinal win that punched the team’s ticket to the state final for the first time since 1960.

“It feels great, I’m excited,” Yousey said. “I expect another win next week, and if it comes down to a kick, I’ll be there.”

The standout kicker isn’t the only Jacket showing much growth this year as the lineup that started the season with plenty of youthful players has proven to be among the state’s elite.

Wasel, who called nearly half of the game’s plays at the line of scrimmage, repeatedly scrambled out of the pocket to connect successfully. He connected 23 times including two touchdowns, while he also ran for a TD. 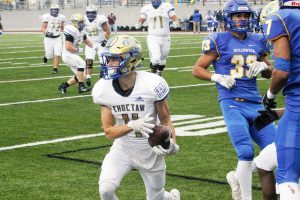 Jax Burchett makes a catch near the Stillwater end zone as the clock runs down. The field position allowed Tommy Yousey to hit a 25-yard FG with one second on the clock. (PHOTO BY RYAN HORTON)

Wide receiver Terrill Davis had three touchdowns and a 7-yard rushing. He finished with nine catches for 97 yards.

Wes Zeigler had 32 yards receiving, while Burchett and Ray each had 19. Ray had 110 yards rushing and a TD.

After a long 60 years, the Jackets hope to improve the school’s state championship record to a perfect 2-0.

Choctaw will have a big test in a rematch with Bixby. The Spartans defeated CHS 24-13 in a District 6A-II-2 game Oct. 9 in Bixby’s Lee Snider Field.

The Spartans (10-0) were the only Oklahoma school to beat Choctaw this year, and they’re on a 35-game win streak after beating Midwest City in the playoffs for the fourth straight year.

The championship game will be 7 p.m. Saturday at UCO. 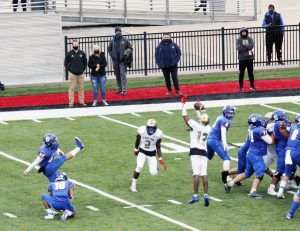 A community sendoff is scheduled for the historic trip to the state final. Supporters can gather in the CHS parking lot near the activities center Saturday at 3:30 p.m. to show support as the players load up and head to state.

Corbin was proud of his entire program’s effort leading to the upcoming title game, and feels honored to lead the Jackets to UCO this Saturday.

“A lot of history is being made here. Really proud of our kids, and I’m really proud of our coaches. I have the best assistant coaching staff, best coordinators, best administration in the state.  This is the best community, in my opinion, these guys do a tremendous job. They love kids, and they work extremely hard for them,” said Corbin. “I always say when you watch Choctaw football, you’re going to see 11 guys work extremely hard and give you everything they’ve got and today was no different. The chips fall in your favor sometimes, and sometimes they don’t, but our kids are always going to leave it all on the field. I couldn’t be more proud. I’m proud of our defense. Stillwater is one of the best on offense, but I’m also proud of our offense, because they’re also really good on defense. We were just opportunistic; I could name 100 guys that did a fantastic job today.” 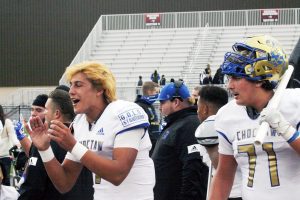 Click HERE for photos of the game by Ryan Horton.