The cases of two people charged with possessing a bomb in Mustang in mid-July have diverged, with one of the defendants pleading guilty and a hearing for the other delayed because of the novel coronavirus. 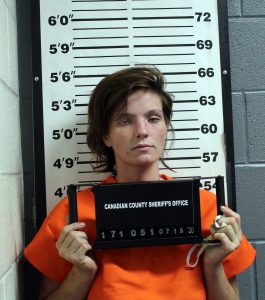 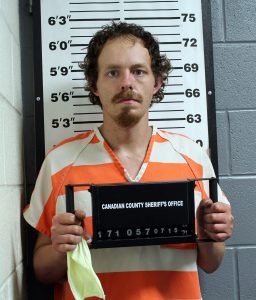 Prosecutors and Mustang investigators alleged Richard Keith Brown, II, and Alyssa Dominique Ledford were found with a bomb, found inside a vehicle parked at Mustang Lowe’s. The two faced charges of face felony possession of incendiary explosive and sawed-off shotgun counts, as well as drug and paraphernalia possession, both misdemeanors.

The 20-year-old Ledford pleaded guilty to all charges in August, receiving a seven-year deferred sentence. According to Oklahoma State Courts Network, Ledford had no specific criminal charges or convictions filed against her as an adult in jurisdictions reporting to it, before the Canadian County case.

Brown’s case could possibly hold a different outcome because of his criminal record, officials said – according to OSCN, he has four criminal misdemeanor cases on his record, including convictions for domestic abuse in 2018 and a 2019 threatening to perform an act of violence, as well as two 2020 methamphetamine possession cases. Court records showed Brown pleaded guilty in one of those cases in April; the other was filed that same month and was still pending as of press time.

At the time of the July 15 incident, OSCN records indicated there was an active warrant for Brown’s arrest in connection with the pending April Oklahoma County case.

Brown and Ledford were arrested July 15, after Mustang officers Barrett Chastain and Kevin Connolly noticed Brown and Ledford allegedly sitting in a minivan parked in the Lowe’s lot; officers routinely patrolled the area, after a rash of area burglaries and attempted burglaries, Police Chief Rob Groseclose said at that time.

When Connolly and Chastain spied the two, something just “looked off,” the chief said; that led them to question Ledford and Brown, initially allegedly finding methamphetamine, marijuana and syringes, investigators and prosecutors said.

It was during a search and inventory of the minivan, however, things moved from a minor arrest to potential big deal – the discovery of both an item believed to be an incendiary device and a sawed off shotgun, Groseclose said.

Officers immediately began blocking off access to the vehicle and to the Lowe’s lot, as Oklahoma Highway Patrol bomb squad arrived on the scene. Once there, members of that unit determined the item found was, in fact, an explosive device, the chief said.

As long as Ledford fulfills all the terms of her deferred sentence, she would not be required to serve any additional jail time, records showed; Brown’s preliminary hearing conference was continued to Jan. 19. If convicted, he could face more than a decade in prison and fees, costs and fines topping $10,000, court filings showed.