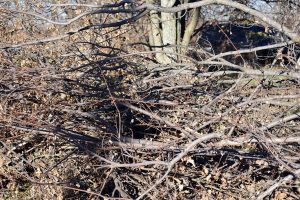 Much of central Oklahoma continues to struggle with heavy debris caused by an Oct. 26 ice storm – including Mustang and surrounding areas. For some, damage to trees was immense, while others experienced damage to structures caused by falling limbs. (Photo by Traci Chapman)

More than a month after an October ice storm unleashed havoc on central Oklahoma, several communities continue to deal with the aftermath, as tons of debris are cleared from the area.
Mustang’s municipal efforts as of Nov. 23 was about 30% complete, as crews continued the first of two passes scheduled throughout the community, City Manager Tim Rooney said Monday.

“(There’s) no estimate at this time (for completion estimates),” he said. “Citizens should continue to monitor the City’s website and social media platforms for the most up-to-date information.”
Rooney did provide a tentative estimate of Mustang’s clean-up costs, which he expected to exceed $1.5 million. The city hopes to recoup some of those with federal funds, after City Council Nov. 3 approved a disaster emergency proclamation.

“This not only allows us to pursue federal emergency funds, it also allows the city to forego some restrictions on bidding and quotes for services associated with cleanup and repair,” Rooney said in early November.

As of Nov. 20, Mustang crews operated 12 trucks for a total of 11 days, hauling 633 loads comprised of more than 46,000 cubic yards, the city manager said. After a short break Nov. 25 through Nov. 29 for the Thanksgiving holiday, work would resume Monday, he said.

Canadian County Commissioners also adopted their own emergency declaration, as did Oklahoma City, during its own Nov. 3 council meeting. Both rural areas of the county and swaths of Oklahoma City located in Canadian County were severely impacted by the storm.

Both Mustang and Oklahoma City have in place debris management plans approved by Federal Emergency Management Agency, or FEMA.

For more information about city of Mustang cleanup efforts and other details, see its website, located at www.cityofmustang.org, or refer to its social media pages, officials said.

For Canadian County residents living within Oklahoma City limits, that municipality’s utilities department offers a series of free landfill days for the disposal of storm debris, officials there said.
The closest of those landfills – Oklahoma City Waste Disposal – is located at 7600 SW 15th Street. It will be open from 8 a.m. to 4 p.m. every Saturday through Jan. 2.

The service is only open to Oklahoma City trash customers; anyone bringing debris must provide a copy of a utility bill and government issued debris showing the same address as that listed on the invoice.

According to an OKC storm debris progress map, as of press time, areas of that city – which surround Mustang’s 12-square-miles – are included on planned pick-up sweeps, although crews remain working in the central part of the state’s capitol. Officials Monday said they had no estimate about pickups in local areas, they said; damage incurred inside that city’s limits and resulting clean-up costs were expected to be “several million dollars.”