In the home opener Choctaw’s No.2-ranked Yellowjackets recorded nine falls, a forfeit and a technical fall.

Caden Holman followed suit with a quick pin of Cameron Fanslet at 113.

Speedy Walden added a second period pin of Michael Fredrickson to put the Jackets up 22-0.

Shaun Muse would add six at 132 pounds when he pinned Justin Pham at the end of the first period. 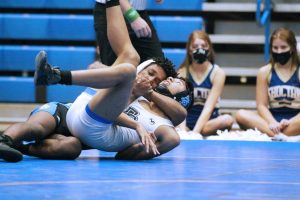 Shaun Muse adsd six points at 132 pounds as he pins Justin Pham at the end of the first period. (PHOTO BY RYAN HORTON)

138-pound Caleb Williams had an explosive back-and-forth match with Hudson Neely. Williams ended up getting caught at the end of the first period.

Cade Manion then pinned 145-pound Trent Thresher to make it a 28-12 contest.

Zac O’Hagen put the Jackets back on track with a quick fall over Triston Brithall at 152 pounds. 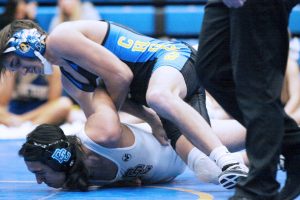 Then heavyweight Keith Burke had a good showing against the state’s top-ranked heavyweight in Jake Sexton. Sexton added a fall for the Antlers near the end of the first period.

Choctaw gave up just three matches and won the dual, 64-18.

“It was a good night. The kids wrestled well,” said head coach Benny Coleman. “Those matches we lost were tough kids. We just need some mat time and more matches.”
Like many programs, wrestling has been heavily affected by the ongoing COVID-19 pandemic.
“We had eight of the starters out quarantined with COVID two weeks for Thanksgiving so we didn’t have much time to get ready for this. We had one kid get it, he’s back and healthy and wrestled tonight, but we had to quarantine anyone he had contact with,” said Coleman.

The state health department had previously quarantined the entire team due to contact tracing before the season started.

“We’ve had a lot of guys get quarantined just because they’ve been around people who had it, but luckily they haven’t come down with it. This was really the first competition we’ve had since last year at state,” explained Coleman.

After missing spring and summer competition, the Jackets are behind schedule in preparing for the annual run for gold in February.

Broken Arrow and Mustang are once again expected to be fighting with the Jackets for top position in a stacked Class 6A, while Stillwater will likely join that fight after some nationally-ranked talent moved in this year in preparation of wrestling at Oklahoma State University in coming years.