Mustang Police Department is asking for assistance in a burglary that cost a local business almost $20,000. 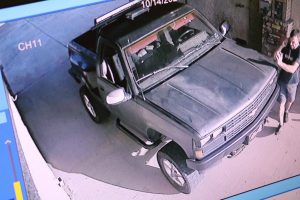 Video surveillance footage of an alleged suspect and vehicles police believe could be connected with two larcenies at an area car wash, one in October and one in November. (Photo Provided)

The report came in to Mustang police dispatchers about 8:30 a.m. Nov. 29, and officers were sent to the 300 block of South Symes Lane on a report of an unsecured business.

“Upon arrival officers found the garage door open on the east side of the business; the business was unoccupied,” Capt. John Gibson stated in the initial incident report. “The owners were contacted, and it was discovered that a burglary had taken place and numerous items were taken.”

Loss from the apparent burglary was estimated at $18,326, Gibson stated in his report.

Officers have also asked for the public’s assistance with two larceny’s recorded by cameras at a car wash located in the 300 block of North Trade Center Terrace.

The first took place Oct. 14; the second was recorded Nov. 24, Detective William Carpenter reported. If anyone has any information concerning the vehicles or alleged suspects, contact Carpenter at 405-376-7713.

In other cases, police are looking for a man on a possible bank fraud complaint. Officer Kevin Connolly reported he was dispatched to a banking institution located in the 900 block of East state Highway 152 at about 11:27 a.m. Dec. 2. There, the officer learned a man entered the branch shortly before 3:30 p.m. Sept. 17 and deposited a $3,000 check; the man then traveled to an Oklahoma City branch and withdrew $1,500 from that deposit – which for some reason did not have a hold placed on it.

To contact the department with any information or questions, call 405-376-2488 or email mustang_pd@cityofmustang.org. The department is located at 650 East state Highway 152.

More information is also available on the Mustang Police Department website, located at http://www.cityofmustang.org/police or on its Facebook page, https://www.facebook.com/MustangPoliceDepartment.