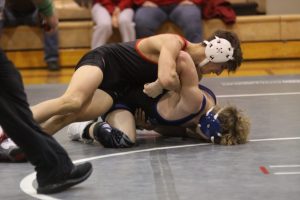 The Titans narrowly lost a home dual with Class 3A’s No. 2 Bridge Creek last Thursday and went on to place second at the Weatherford Tournament on Friday and Saturday.

Carl Albert came up short against Bridge Creek in a 40-34 loss.

Kasen Miller, Logan Bibb and Will Batts each won by fall for the Titans. Braden Anderson, Isaac Grant and Brock Johnson also won in the dual.

Bridge Creek’s coach Will Staats liked what he saw from his team in the early season dual.

“We wrestled tough. Proud of how we wrestled. It’s still early and we have some things to work on, but I think my guys have bought in to working hard. Carl Albert is well coached and a tough team. We need to continue to improve but I like how we are wrestling,” he said.

The Titans regrouped on the weekend with a strong second-place showing at the two-day tournament in Weatherford.

“I’m really proud of the overall efforts for both days of the tournament. It’s a young team with some veterans balancing things out. It was a good way to finish the first half of the season. The team is looking forward to January and February. They have the potential to have a really strong year both individually and team wise,” Hodges said.

The Titans return home Jan. 7 for a dual with Norman.