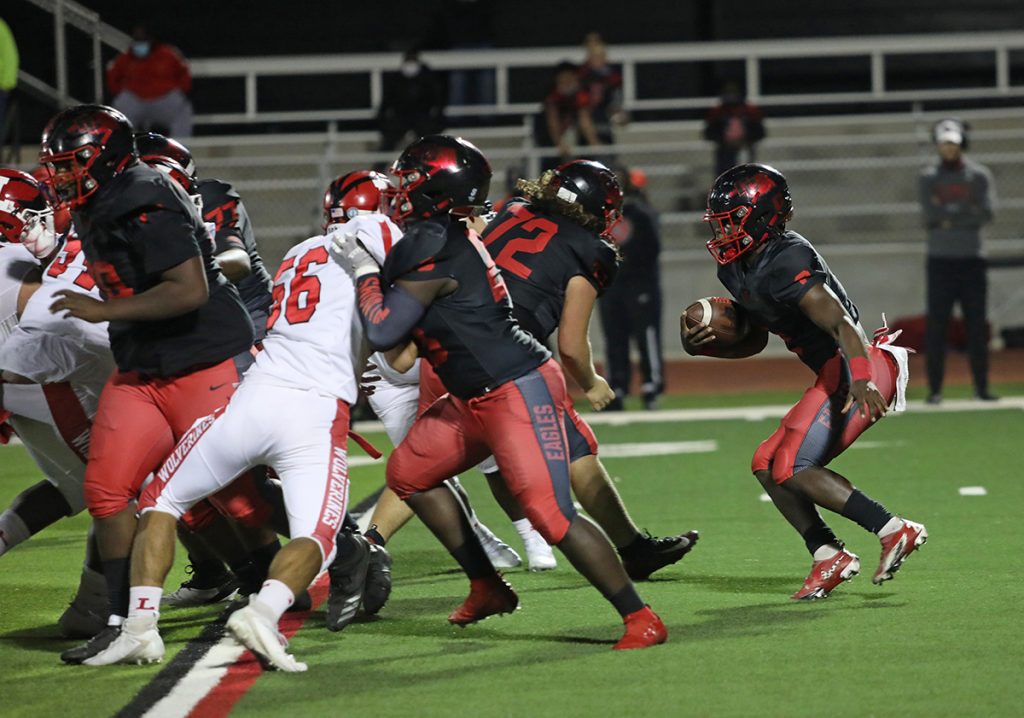 Jahkobie Smith looks for a running lane against Lawton. (Photo by Jeff Harrison)

The Bombers, who finished second in the district, had 14 players earn awards including five MVPs and several first-team and honorable mentions.

Makale Smith was named a co-Offensive Player of the Year along with Stillwater’s Caleb Allen. The Oklahoma State signee led the team with 40 receptions for 777 yards and 7 touchdowns. He had more than 100 yards receiving in three games including 9 catches for 127 yards in his final game against Bixby in the state semifinals. Smith also started at defensive back where he recorded 52 tackles and two interceptions.

Brandon Wright and Del City’s Sevaughn Sephus were named co-Defensive Newcomers of the Year. Wright finished with 74 tackles and one interception.

Kristawn Friday was the co-Running Back of the Year along with Lawton’s Christian Houston. Friday rushed for 635 yards and 11 touchdowns as a senior. He also started at linebacker and tied for second on the team with 77 tackles.

LeJaylyn Long-Jackson shared Inside Linebacker of the Year with Putnam City North’s Hunter Birmingham. Long-Jackson was the team’s leading tackler with 79 tackles along with 7 sacks. 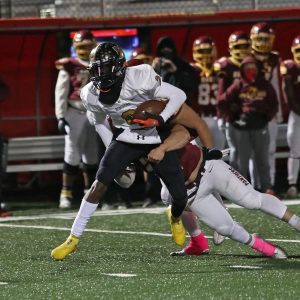 Makale Smith was named the co-Offensive Player of the Year for District 6A-II-1. (Photo by Jeff Harrison)

On special teams, Elijah Escobar and Rile Powell from Putnam City were named co-Kicker of the year, and Brian Wilson Jr. shared Returners of the Year honor with U.S. Grant’s Dorian Wilson.

The Eagles, who finished third in the district, had 10 players honored including five MVPs.

Jahkobie Smith was named the Utility Player of the Year. The versatile senior started at quarterback, running back, safety and punter. He accounted for more than 1,500 all purpose yards and 17 touchdowns and had 22 tackles on defense.

Sherrod Davis was selected as the Wide Receiver of the Year after finishing with 26 catches for 466 yards and two touchdowns.

On the defensive side, Donovan Stephen was named the Outside Linebacker of the Year. The Oklahoma State signee finished with 62 tackles including 13 tackles for loss and three sacks and an interception.

Sephus shared the Defensive Newcomer of the Year Award. The senior had 47 tackles and 10 sacks.

Stillwater’s Qwontrel Walker was named the Most Valuable Player and Tucker Barnard was Coach of the Year.

Coaches from the eight district schools voted on the all-district awards.