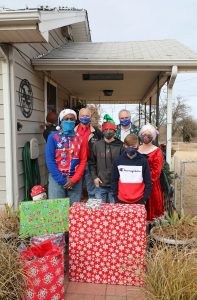 But like many things this year, it looked a little different.

Rotarians bought gifts for a local family in need. The group shopped at local stores and online for the three children and delivered the presents on Christmas Eve.

“We’ve been doing a lot of shopping and we got about everything,” said Sally Newey with the Midwest City Rotary Club. “I think they’re going to be really excited.”

The group usually hosts a Christmas party for local children in foster care but had to cancel the event due to the pandemic. The event includes food, crafts, and a visit from Santa.

Newey said they were disappointed they had to cancel the event but were happy to brighten the holidays for some children. The group has been helping the family for several months following a tragedy. They have provided clothes for school and money for meals.

“They had already gotten a few things, but we were able to get about the rest of the things, so it’s really been a blessing,” Newey said.