The Midwest City boys basketball team faced a familiar opponent last week in the finals of the ConocoPhillips/Arvest Invitational.

And with similar results.

For the second time a week and a half, No. 9-ranked Midwest City fell to Mid-Del rival Carl Albert in the championship. The Titans prevailed with a 55-47 win. 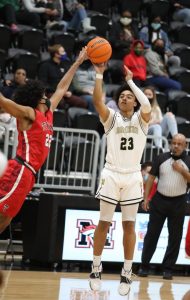 Ethan Ganaway shoots from the perimeter against Carl Albert. (Photo by Jeff Harrison)

The Titans, who are ranked No. 3 in Class 5A, beat the Bombers in the championship of the Mustang Holiday Classic on Dec. 30.

“Hats off to Carl Albert. They are well coached and a very disciplined basketball team. I believe we got a little winded in the third quarter, which led to some quick shots and poor transition defense,” McMullen said.

The Bombers (5-3) had no trouble scoring in the first half. They led 16-13 in the first and 32-23 at halftime. Makale Smith provided scoring punch with 13 points before the break.

But the scoring dried up in the second half. Carl Albert took the lead 42-36 at the end of the quarter and continued to pull away in the fourth.

McMullen commended his team’s defensive effort in the tournament and commitment to improving offensively.

“Overall, defensively, we are doing a lot of good things. When we share the game offensively, we can be dangerous,” he said. “I need to manage timeouts and sub rotations better to limit fatigue. That’s on me. I love this team and love our growth mindset. We will keep getting better every day. It’s a marathon.”

The Bombers reached the tournament finals with wins over Tulsa Booker T. Washington and host Bartlesville.

Midwest City kicked off the tournament Thursday with a 68-50 win over Booker T. Washington.

The Bombers got off to a hot start and led 38-20 at halftime. Ethan Ganaway fueled the surge with six 3-pointers in the first half.

They continued to pull away in the third quarter and won by a 68-50 margin.

Ganaway led the team with 21 points, including seven 3-pointers. Smith was also in double figures scoring with 13 points.

On Friday, the Bombers again raced to an early lead against Bartlesville. The host Bruins rallied in the second half but couldn’t pull out the win.

Midwest City scored 20 points in each of the first two quarters for a 40-27 lead. Hart hit four 3-pointers in the second quarter.

Bartlesville inched back in the third quarter, narrowing Midwest City’s lead to 51-43 heading into the fourth. The Bombers were again outscored in the fourth quarter but held on for the 57-51 win in the semifinals.

Midwest City hosted Choctaw on Tuesday night (after press time) and returns to action Friday with a game at Ponca City.