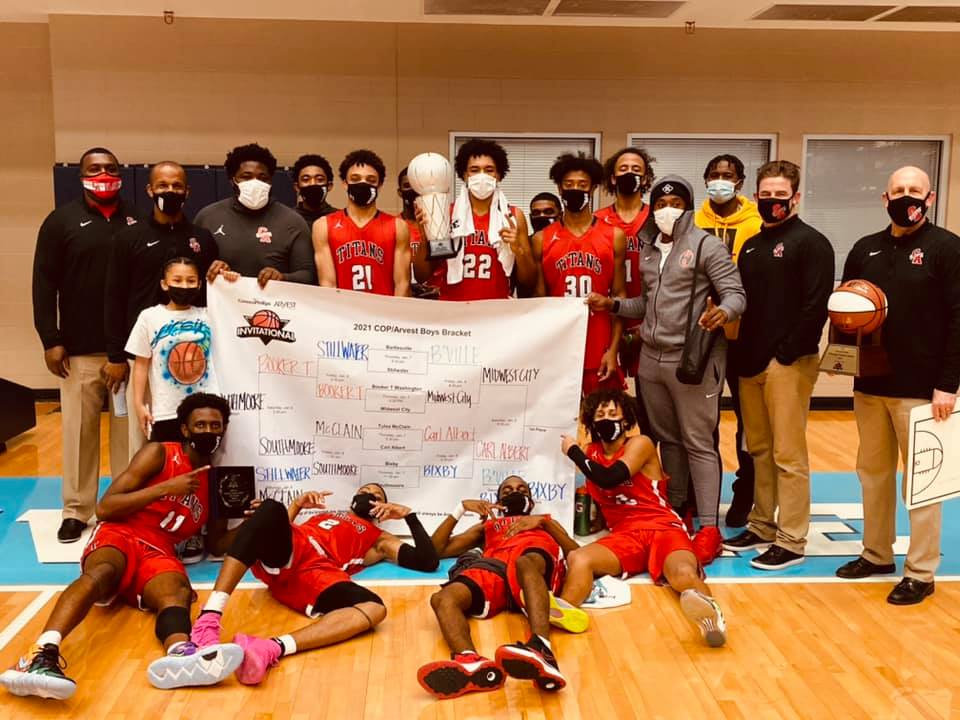 BARTLESVILLE – The sizzling Carl Albert Titans captured their second straight tournament championship over neighboring Midwest City with a 55-47 triumph over the Bombers in the championship game of the PhillipsConoco/Arvest Invitational in the Bruin Fieldhouse Saturday night.

Friday night it was all offense as the Titans singed the nets for 102 points to outrace Bixby, but against their crosstown rivals in the championship, it was defense that lifted CA from an 8-point halftime deficit to claim victory No. 8 in a row as the Titans continue to battle Tulsa Memorial and Lawton MacArthur for the No. 1 spot in the Class 5A rankings.

For the second week in a row, Titan senior James Locke, who scored 48 points in the three games, was the Tourney MVP, while teammate Antonio Watson, who had 49, including 25 in the big win over Bixby in the semifinals, was named to the All-Tournament team.

With All-American football star Makale Smith leading the way, the Bombers grabbed a 31-23 halftime lead in the defensive slugfest. Smith would finish with 21 but no other Bomber had more than 7.

But Jaden Harrell and his Titan teammate heeded Coach Jay Price’s halftime suggestions and clamped the lid down….tight! The Bombers could manage only 4 points in the third period while Curtis Rose had a pair of treys, Harrell had a field goal and a free throw as did Q Woodson, Locke had a trey and Watson had an old-fashioned three point play as the CA boys took a 42-35 advantage into the final stanza.

An that was that as Locke and Watson each had a pair of field goals and Rose, Harrell Watson and Woodson added free throws

THE TITANS roared into the championship finals against Midwest City for the second straight tournament with one of the great performances in the long and storied history of Carl Albert basketball.

And for squad members Noah Dobson, Tashawn James, Xazavier Ware and Cobe Crews, the 102-74 blowout over Bixby in the semifinals was especially sweet since all four were members of the CA football team, whose only loss in the fifth straight State Championship season was to Bixby in rather disappointing circumstances.

The Titans’ sometimes frantic, always moving, always trapping and always frustrating defense was honed to perfection, like nothing the Class 6A No. 10 ranked Spartans had ever seen before.

But it wasn’t easy.

Mustang tourney MVP James Locke had a pair of treys and two free throws in the first quarter and Crews got his name on the book with a free throw, but the Spartans hung tough and the two clubs were knotted at 20-all after one quarter.

Mustang All-Tourney honoree Antonio Watson reached his career high again with 25 points to lead the points parade which included nine free throws, four of them in the second period along with three field goals. Jaden Harrell broke the BHS hearts with a trey and Curtis Rose and Mo Cudjo added field goals.

Locke bombed in three more treys enroute to 21 points for the night and added a field goal but 6-4 Bixby soph sensation Parker Friedrichsen, who finished with 34 points, kept his team in it to hold the CA Boys to a 49-46 advantage at halftime.

Following some suggestions at halftime concerning defense on Friedrichsen from Price, the Titans followed the script, limiting Bixby to just 10 points in the third period, while the “Q-Man” Quentin Woodson erupted for a trey and three field goals while the game turned into a layup drill off the press for the Titans and the lead suddenly was 17.

And they were just getting started as Cudjo came in for four field goals, Watson had four free throws and a pair of buckets and Rose added two field goals and two free throws for 29 more points in the final period including a VERY satisfying field goal from Dobson.

10 TITANS broke into the scoring column in the opening round 80-43 romp past Tulsa McLain on Thursday, led by 13 from Locke and Woodson, 12 from Watson, 11 from Cudjo and 10 from Rose.

The Titans will be idle till Jan. 12 when they journey to Lawton to test the Wolverines.