Mustang’s new animal welfare center is nearing completion, as a Monday tour confirmed the project is gearing up for its final weeks of construction. 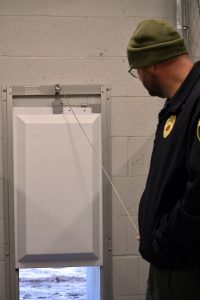 Mustang Police Chief Rob Groseclose and Deputy Chief Mike Wallace were on hand Monday for a look at the quickly developing $1.644 million, 5,560-square foot facility. Officials initially expected the project to be completed in October; however, a severe ice storm that month and subsequent weather issues pushed the opening to 2021.

Groseclose and Wallace said Monday they anticipated the facility would be complete mid- to late February, barring any further unforeseen weather events.

“We really wanted to be open in the fall, but we can’t control the weather, and it will be worth waiting for,” the chief said.

Crews continued their work on the facility Monday, after Mustang City Council last week approved a seventh change order on the project. That included $18,266 in additional costs – for black coated fencing for both dog and cat adoption meet and greet areas, located on opposite sides of the building, as well as a dedication plaque and electrical connection between the building and an OGE transformer.

Those costs would come out of the $50,000 project contingency fund; that fund still has a balance of $23,164, Groseclose told council members during their Jan. 5 monthly meeting.

Remaining slightly under budget and moving ahead quickly now, the center was a more than four-year labor of love for Groseclose, Wallace and others committed to upgrading the city’s animal welfare facilities. The chief and deputy chief conducted several tours of other municipal facilities and have been involved in every stage of development and construction. Their pride in the project was evident as Wallace pointed out the feline housing area of the new center – a large and airy room with sunlight pouring through windows that looked out into a planned screened outdoor area cats could also enjoy.

“This is really something special, and we’re very proud of how it’s turned out,” the deputy chief said.

Groseclose said he was pleased by the huge increase in capacity for both dogs and cats, as well as upgraded facilities that would mean the center remained useful and relevant for decades to come.

“We conceived this for the long-term,” the chief said.

The new animal welfare center is a far cry from the aging – and, in places, crumbling – facility used by the city for decades. That building would be repurposed once the new center is completed; officials as of press time were not certain how it would be used, although everything from offices to storage had been discussed, they said.

The center includes large, expanded facilities for both dogs and cats, including a secure entrance and areas for “meeting and greeting” time between prospective adoptive parents and adoptees – both indoors and outdoors. It also includes office areas for Jill Heck, Mustang animal control officer, as well as additional staff and volunteers; a community meeting area that can be used for everything from educational sessions to gatherings and more; outdoor access from each individual dog enclosure; a sallyport for secure intake of animals; and extensive areas for animal feeding, cleaning, storage and more.

Voters in 2016 approved the new facility as part of a sales tax extension that also funded a new Mustang Fire Department emergency operations center and second station located on the east side of the city, extensive renovations and expansions to Mustang Town Center, water reclamation updates that recently garnered the city a Keep Oklahoma Beautiful Award and several more projects.

The center is located adjacent to Mustang dog park and near the city’s water reclamation facility.

The dog park, first developed in 2017, also saw its own recent facelift, reopening in late September.