The track has been out of service for several years  and the City of Del City does not have the right of way or authority to repair the re-occurring potholes.

Del City and Midwest City officials met with representatives from Watco Companies, which owns the rail line. The company agreed that the crossing is no longer needed and could be removed.

Watco awarded a bid to Cross Line Railroad Contractors to remove the rail crossing. The project cost is to not exceed $24,047.50. 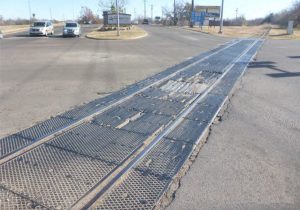 Midwest City and Del City are working together to remove an old railroad crossing at Sooner Rd. and Reno Ave. (Photo provided)

Both Midwest City and Del City agreed to split in half the cost of removing the tracks and repairing the road and potholes. Sooner Road serves as a dividing line between the two municipalities.

The contractor started on the project Tuesday, Jan. 19.

Director of Community Development Monica Cardin explained that the road will not be shut down all at one time and when they are notified that the partial closures will begin, they will tell the public.

“We will not close the entire intersection at once. Only certain lanes will be closed at different times. When we know, the citizens will know,” said Cardin.