Hatchett, who is the Del City High School boys basketball coach, was filmed at the Downtown Community Basketball Court in Oklahoma City. He was approached by a mutual friend of a producer to be in the film. 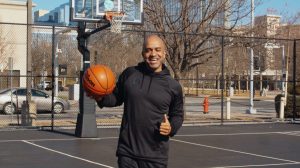 Lenny Hatchett, of Choctaw, at the Downtown Community Basketball Court.

“I agreed to do it because it is something positive about Oklahoma,” Hatchett said. “We went down to the courts by Chesapeake Energy Arena and lip synched the “Lovely Day” song and enjoyed the moment.”

Hatchett did not know if he would be included in the video until it aired Jan. 20. 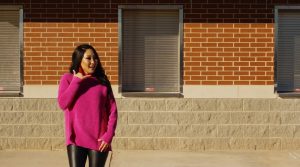 “It was exciting, and I was happy my kids were able to see it,” Hatchett said. “We watched the inauguration together and it was neat to be part of the history.”
One of the most dramatic shots was MedicineBird performing an American Indian dance on Skydance Bridge in Oklahoma City. MedicineBird is Kiowa and Cheyenne Arapho. He also serves in the Oklahoma National Guard.

“To be asked to show my style, it’s a huge honor for me and my family,” MedicineBird told KOCO.

MedicineBird told the news channel that he was asked by former Rep. Kendra Horn’s office to display Oklahoma’s Native American heritage for the show.

Graves was filmed while dancing on top of a building in Midtown with the Oklahoma City skyline in the background. And Germany rides a bicycle through the Heritage Hills neighborhood in the video. 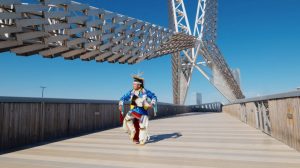 SGT Denny Medicinebird, of Jones, dances on the Skydance Bridge.

The creative team had a short time window to produce the video. McMahan said that meant leaning on friends for help.

“We just put out a dispatch to a group of people that we thought could present the diversity of Oklahoma,” McMahan said. “Hillary (Self)’s sister works for Carl Albert schools and was kind enough to gather a group. Everyone was amazing.”

They filmed the videos about a week before the inauguration. 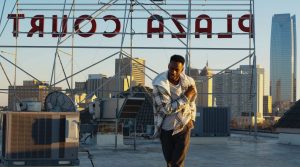 Oklahoma City Mayor David Holt was among those impressed with the video.

“It was a pleasant surprise and a great source of pride to see Oklahoma City so well-represented in our nation’s Inaugural program,” Holt said. “From our neighborhoods to our Indigenous culture to our skyline, OKC was all over it. My gratitude to everyone who made it possible!”

The Lovely Day video can be viewed HERE. It begins at the 1:20 mark.