Officials took action to correct a section of the Choctaw Code of Ordinances that was riddled with problems, and made clear that residents can use small recreational fire pits and charcoal grills on their private property.

As the previous ordinance was written, City of Choctaw residents technically needed burn permits to lawfully do recreational backyard activities such as using a fire pit or smoking meats.

“Everyone, including myself, has probably broke this rule. I have a Chiminea, and apparently you were supposed to get a permit before throwing wood in there,” said city manager Ed Brown.

The previous ordinance was approved in 1986. 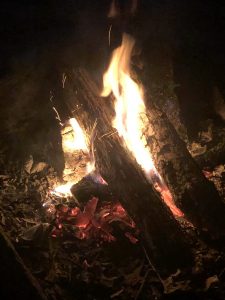 A fire pit burns in Choctaw. City officials say due to an overlooked city ordinance from 1986, burning in fire pits within the city limits had previously required a burn permit approved by the fire department. Action taken last Tuesday officially authorizes the use of recreational fire pits on private property without seeking a permit. (PHOTO BY RYAN HORTON)

City officials say the old ordinance had several erroneous references such as County Health Department approval, no burning within 150 feet of a residential structure and no burning after dark.

“I’m sure thousands of people were violating our ordinance every year. So, I went back with the fire chief and looked at it,” said Brown.

The city updated its opening burning ordinance, modeling off of neighboring Midwest City’s regulations.
City Council unanimously voted in favor of Ordinance No. 836-2021, amending Sections 8-701 through 8-707 and adding sections 8-708 through 8-713 regulating open burning in the City of Choctaw.

Recreational burning can be done at any time.

Recreational burning on the ground is required to be less than three by three feet wide and two feet high, and surrounded by rock, brick or concrete blocks etc. Those fires shall be at least 25 feet from a combustible structure.

If in an approved container such as a metal pit, the fire may be 15 feet from your own home.

Recreational burning shall be monitored from start to the time the fire is out, and is not be used as a disposal type fires.

The entire Choctaw Code of Ordinances can be found online at MyChoctaw.org