District 10 of the Veterans of Foreign Wars Auxiliary 7291 held their annual essay contest recently and a National Patriot Pen Award was presented to the winner as well as 22 others.

The recognition ceremony was hosted on Jan. 14, at VFW Post 7291 for the winner of the contest, Emma L. Strong.  Mrs. Bonnie Wheeler, Auxiliary President, was unable to be present for the presentation. 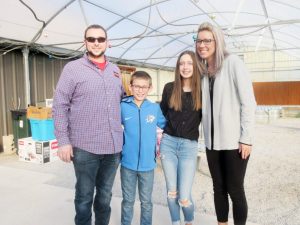 Emma is a very talented young lady in the seventh grade at Nicoma Park Middle School.  She also works very hard as the Miss Buddy Poppy for the Midwest City VFW and takes her essay on

Patriotism very serious.  The Poppy Program finances many of the rehabilitation and service programs for veterans as well as the VFW National Home for Children.

The Essay was 300 words on “What Patriotism Means to Me” and more than 600 entries were received.  The winner, Emma Strong,  will compete on the National level.

The Auxiliary No. 7291 is very active and supports and assists in the Posts programs.

Emma’s family was present for the presentation as well as two Grandmothers, Jamie Thompson and Christine Parrott, and her Uncle, Tony Thompson who is a great supporter of the VFW.  Many of the VFW members were also present. 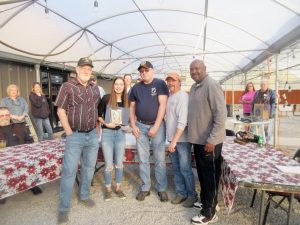 Emma Strong’s Essay on “What Patriotism Means to Me”

By definition, patriotism is the devotion to and vigorous support for one’s country.

Because not all are able to express their devotion and support by fighting and sacrificing for our country, some can simply show it by intentionally recognizing those who served and showing sincere gratitude every chance, they get.

American soldiers truly are heroes that wear cammo instead of capes. Defending and fighting for people they don’t even know, and knowing there is always a chance they could not return home.  They build bonds with fellow countrymen and promote fraternity with such pride.

I’m a kid so I can’t enlist in the military. But I can promote patriotism by waving the flag proudly in good times and bad. The flag is not just a piece of cloth that we put on a pole; I understand what it represents and is a daily reminder of the sacrifices that are made for me.  I never lose faith in my country when things get rough, but instead I know that even in the worst days, I have it better here than any other country. There is still a lot I need to learn, but I have learned to be an advocate for veteran organizations, because I know how to explain how important they are to kids my age.

And finally, patriotism is not only expressing love for your country on days like Independence Day and Republic Day.  Love and support of our country should be shown every day, and appreciation to every Veteran should be shown at every opportunity. Patriotism cannot be forced, but should be naturally passed on through generations. Most importantly, it can never be taken away.  This is the land of the free and the home of the brave, and I am always proud to be an American.

Essay by Emma Strong in 7th Grade at Nicoma Park Middle School, which placed first in the VFW Essay Contest by District 10 with more than 600 entries.