The City of Choctaw is now over 90 days past an ice storm that left limbs and trees downed throughout the area.

City officials say residents have had plenty of time to move debris to the curb, and many have worked to remove debris from their property entirely which will alleviate some of the burden on the city’s side of debris removal costs. 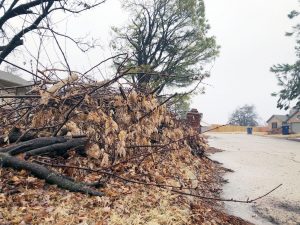 During the Jan. 19 regular City Council meeting officials voted to approve a contract for storm debris pickup with TFR Enterprises, Inc. out of Leander, Texas.

Remaining debris from the October ice storm should be placed near the curb in lengths of 10 feet or less.

The contractor will start pickup in the next 30 days, and will only collect storm debris.

There will be only one pass through Choctaw for the debris pickup with this contract.

Neighboring Midwest City has spent over $4.5 million and collected nearly 15,000 tons of vegetative debris so far. That city estimates they’ve already completed about 75 percent of the cleanup effort and expect to be finished in early February.

Before leaving office, President Donald Trump officially declared a federal disaster for 13 Oklahoma counties due to damage from the October ice storms. Governor Kevin Stitt said damage estimates for those counties, including Oklahoma County, was about $27 million.

To keep up with the city’s public meetings and agendas visit MyChoctaw.org

Earlier story about the ice storm