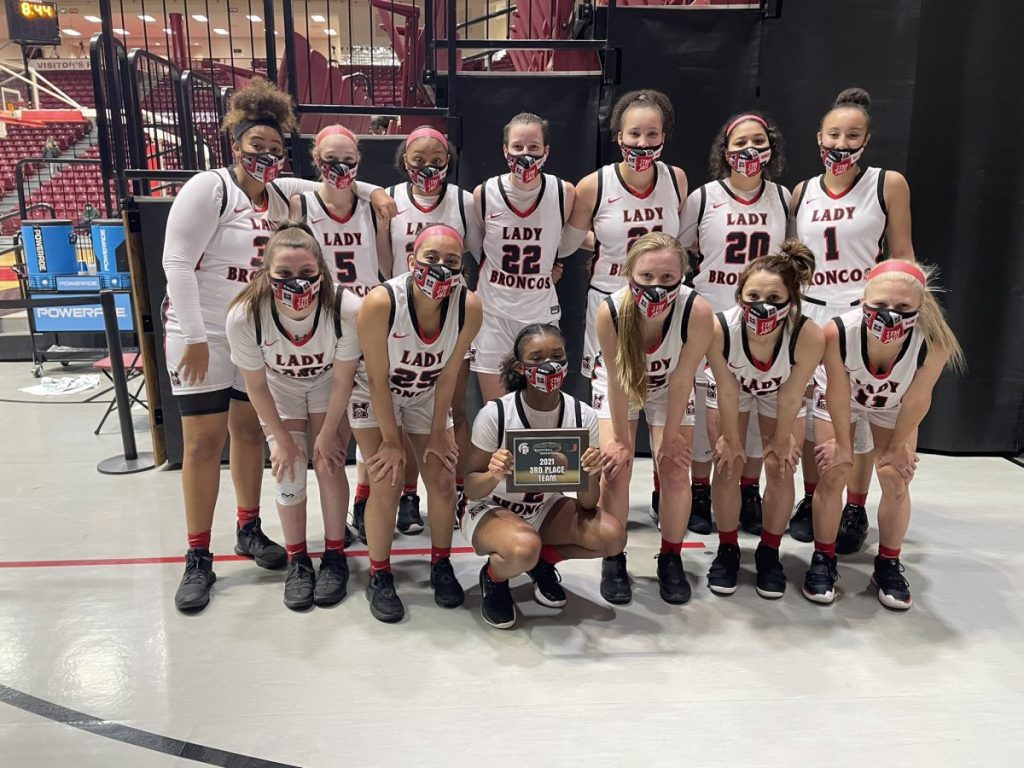 “As a coaching staff, we let them know what we needed to do,” Bass said.

Bass said she was particularly proud of Randi Harding, who scored 16 points against P.C. West and earned all-tournament recognition.

“I mean, [Harding] shut down every person she guarded, but also, she handles the ball for us 90 percent of the time,” Bass said, “and under a lot of pressure.”

Mustang (11-3) started the weekend with a 39-point win against Ponca City. The following night, the Broncos struggled to hit shots against Union with the same consistency.

“When the ball’s not falling, you’ve gotta get offensive boards, and we weren’t doing that” Bass said. “I think, also, you get so used to seeing the ball go in that when it’s not, you don’t attack the rim as much.”

Bass said the experience of driving from Mustang to Jenks each night was difficult as the Broncos were unable to stay at a hotel due to concerns related to COVID-19.

“We had to drive back-and-forth all three days,” Bass said. “When you travel that long, it’s hard to get the legs beneath you.

“I don’t like to make excuses, but we’re usually a pretty good shooting team,” Bass said.

In spite of the loss, Bass commended her squad’s resiliency.

“I think what I was proud of is that we never stopped fighting,” Bass said. “I think we got within eight in the third quarter.”

Bass said she feels that her team, comprised mostly of juniors and younger, has not reached its peak yet.

“We want our best in state,” Bass said. “I’m just excited for the rest of the season and proud of our girls for buying into being a team.”

Mustang will close the season with five in-conference matchups. The Broncos have tests against No. 7 Moore and No. 18 Yukon on Friday and Saturday, respectively.

“Right now, Moore and us are probably shooting for the third or fourth regional,” Bass said, “so that will be a huge game for us to see who secures it.”