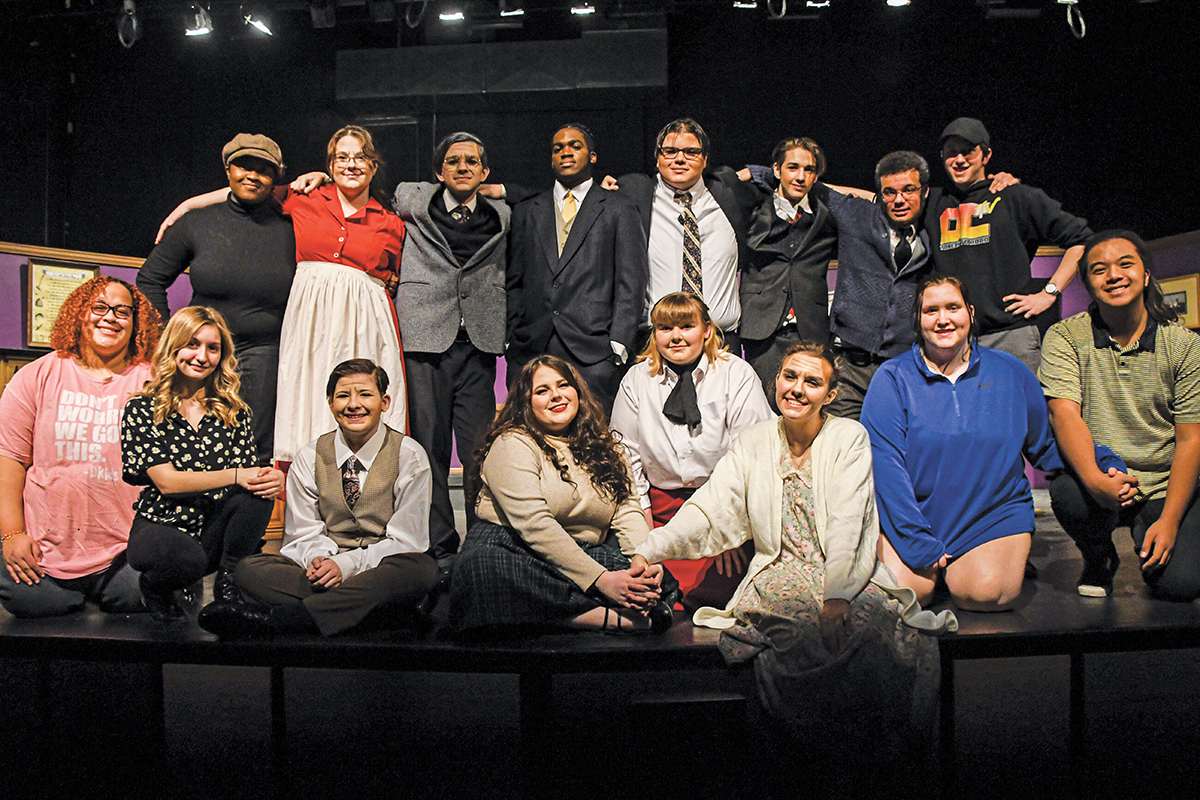 Del City High School Theater Arts program put on the Agatha Christie play “And Then There Were None” on Jan. 21-23, as the first live performance in the newly renovated Performing Arts Theater. The English murder mystery thriller is set in the 1950’s on the little Soldier Island off of the coast of Devon, England. The students all were dressed in amazingly era accurate costumes, and the set, which was designed by the students, was perfectly done for the play. The acting was superb, you would have never guessed that you were watching a High School Play, and not a professional company. Every character showed a great amount of talent, and the whole performance was riveting and kept you guessing. The students clearly worked very hard to achieve the level of success they had with the play.

Of course, the Theater Arts Program hasn’t had an easy run of things this school year, with COVID and special measures being taken because of it.

“We have done the best we can. We have set up a rigorous schedule, every student had to be in masks at every rehearsal, we socially distanced the show as much as we could, but with live theater some moments have to be close, but we prepared for that. We have done thermometer checks every day, our kids have monitored their health, it’s just been a true blessing to be able to work and do this, explained Theater Director Guy Mitchell. 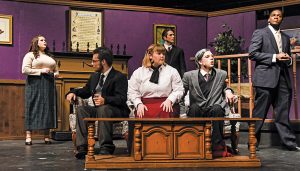 Del City High School students performed “And Then There Were None” last week at the newly renovated Performing Arts Center. Photo by Stephanie Terry

“We finally took off masks this Monday when we did dress rehearsal. The kids will perform without masks, but when they go off stage, they put one right on. Everyone has one in their pocket or a purse, they can put it on right after they get off stage. It’s all about doing your due diligence and understanding that sometimes quarantines happen. We always have someone ready to take a place just in case that happens.”

The students had a lot to say about what it was like and the challenges they endured this year as well. Jacob Sullivan, a Junior who plays Philip Lombard in the show, said it was a struggle getting used to wearing masks and socially distancing during rehearsals, and that getting to take off the masks finally helped with getting their lines out easier.

“We definitely became closer as a group because of it, we were all having our own stress, all that trial and tribulation, made us all a closer family,” said senior Alex Rackley who plays Judge Wargrave in the show.

“There were a lot of times we had plans to get together and get on the set and work, and then at the last second things would go to remote learning, so it was very much learning how to take things on the fly, being flexible.”

Mitchell also talked about the challenges of teaching Theater class during a time of the Pandemic.

“Theater in the virtual space is a different world, but we’ve adapted the best that we can. My kids have recorded themselves at home and uploaded it to Canvas, which is our learning management system. I grade them on that, or we have zoom meetings where we talk about a show. Kind of in a fun way it’s helped kids learn the academic side of theater and doing the research versus the performative side,” said Mitchell.

While COVID may have slowed them down a bit and provided extra challenges, it didn’t stop these students from putting on an amazing show.

“This play is just another example of the world coming back to normal, and getting right back out there. We were gone almost a year because of this thing, the lock down, COVID and all that but we’re right back to the grind,” said Rackley.

Mitchell gives all the credit for the show and its success to the students and their hard work and dedication.

“I have an amazing group of young artists, I know every Theater teacher says that, but these kids buckled down, and when I gave them the challenge of performing in front of an audience, they said we are doing a show. They have worked. I told them that tonight they have earned this audience, they have earned this moment. These kids really have, they stood up against my standards of COVID protocol, which sometimes may have been too rigorous in some eyes, but they knew we couldn’t leave anything to chance, we could not let that happen. Because of that they have created something beautiful out of a pandemic that could have taken away everything,” said Mitchell.

However, the students were all quick to sing Mitchell’s praises as well, saying that he was such a great director and provided them with the opportunity to learn and grow together.

“Our director is an amazing director, he went through all of this with us, and I know he won’t take any credit for it, but he’s the reason why this whole thing came together and why we put this play on to begin with,” said Sullivan.

Sullivan also said the biggest challenge he faced while preparing for his part was learning the accents and being able to fluidly and effectively use a British accent.
The students were very excited to be performing in the new theater as well.

“The new theater is fantastic, it’s definitely an upgrade from what we had previously. It really needed the upgrade, we’re really glad we got it, glad to see where it’s going to go in the future, who’s going to be performing on it, what plays are going to be done, that’s how I feel about it. It’s very interesting to have an audience back after COVID, social distancing has been hard, but of course we found a way to make it all happen, and that’s all that matters,” said Sullivan.

Sullivan plans to go on to major in Theater in College and pursue it as a career, while Rackley is planning to go to college for English Education to become an English teacher, and perhaps be an actor as well.

If you missed the incredible performance of the Theater group this go round, you will have another chance in May when they perform an off-Broadway play called “Puffs” which will be based on a school of witchcraft and wizardry.