Lenny Hatchett knew his team could not let up against Midwest City. 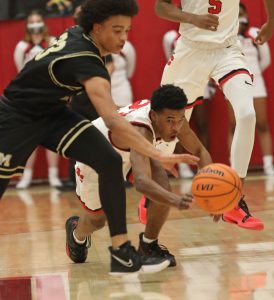 The Del City boys led for much of the night but had to fend off several runs by the Bombers in the rivalry matchup on Jan. 19.

Midwest City’s last charge came in the final minutes of the game. Israel Hart knocked down a 3-pointer to pull the Bombers within four at 76-72 with just under two minutes remaining.

But the Eagles quickly squashed the Bombers’ comeback.

Keyondre Young and Brandon Garrison scored with back-to-back dunks and Javeon McCalister added a layup off a steal to seal the 84-75 win.

“They definitely hit you in phases and they can really shoot the ball well,” Hatchett said about the Bombers. “We knew we had to come out and get stops in the second half and I’m proud of our kids for doing it.”

Hart was the leading scorer for Midwest City with 21 points. Ganaway scored 15 and Makale Smith and Kevin Overton had 13 each for the Bombers.

Midwest City briefly took the lead in the second quarter on a pair of scores by Hart. They tied the game 35-35 on free throws by Smith with 47 seconds in the half. Davis put the Eagles back on top with an offensive rebound and putback before the buzzer, making it a 37-35 halftime score.

Del City extended its lead to 60-49 at the end of the third. Young fueled the run with 10 points in the quarter.

The Bombers tightened the score in the fourth quarter with their outside shooting. Ganaway and Hart both hit a pair of threes and Kevion Hudson had one.

But they couldn’t make up the difference in the 84-75 loss.