Mariah Webb’s Del City Lady Eagles unleashed two days of frustrations in the annual Carl Albert Titan Classic on Saturday and they broke a tie going into the fourth quarter to defeat Glenpool, 44-31, on the final day of action.

After battling to a 10-10 tie in the first quarter, the Lady Warriors squeezed out a 21-20 advantage at intermission and the two clubs were knotted at 28-all going into the fourth quarter.

That’s when Webb shared some of her coaching experiences which came after brilliant careers at both Midwest City High School and Kansas State University. During this exchange, she suggested very sternly that her girls might want to concentrate on playing some better defense. 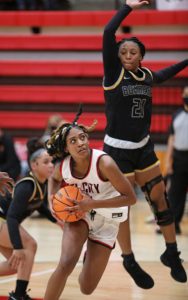 “The offense will come if you’ll stop them,” she promised and the Lady Eagles must have believed her as they launched a 10-point flurry featuring back to back to back treys from Summer Pogue, Nathella Williamson and Ebony Crutchfield for a 38-28 lead.

Glenpool scored a total of 3 points on the suddenly ferocious DC defense in the final eight minute span.

Junior Jaylynn McCallister led the way with 19 points and earned a spot on the Classic All-Tournament team scoring 40 points in her three outings. The 6-0 junior sharpshooter was deadly from three in the early going as she downed three from beyond the arc to go with a field goal and 8 free throws.

She also had 9 rebounds and came up with 4 steals in the contest.

Crutchfield had 9 points including a pair of treys while Williamson added 7 and A’Shari Sykes had two field goals and two free throws. Pogue’s trey rounded out the scoring.

THE EAGLES ended up in the Saturday clash after lop-sided losses to a pair of 6A powers in the early rounds of the Classic.

Edmond Memorial raced to a 61-20 victory on Thursday in the opening round of the tournament. McCallister led the scoring with 10 points while Pogue had 6 and Sykes added the other 4.

Round 2 found the Lady Eagles on the short end of a 45-25 decision to Westmoore. Again, McCallister was the top scorer with 11 points while Sykes added 9.