The 45th Infantry Division Museum is the nation’s largest state operated military history museum, and Oklahoma is preparing for an upgrade.

The new facility, with sufficient space and climate control systems to preserve artifacts, is expected to better tell the entire story of the Oklahoma National Guard.

The current museum is open to the public and depicts the military history of Oklahoma, the 45th Infantry Division and the Oklahoma Air and Army National Guard. 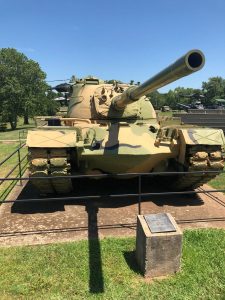 An M-48 A5 medium tank sits on display outside the 45th Infantry Division Museum, located at 2145 NE 36th St. (PHOTO BY RYAN HORTON)

The location and funding source of the new museum has not been announced, but Oklahoma National Guard leaders would like for it to be within a mile of the 45th Infantry Division Museum offNE 36th Street and Interstate 35, near Oklahoma City’s Adventure District.

The existing museum has been located in the same location for nearly half a century.

In 1965 the Oklahoma State Legislature took action to create the 45th Infantry Division Museum and placed it under the supervision of the Adjutant General of Oklahoma. Nine years later, the

Lincoln Park Armory became available and was dedicated to the museum for permanent occupancy.

“The people of Oklahoma have been defending home and honor longer than there has been a state,” said Dr. Bob Blackburn, executive director of the Oklahoma historical society.
The new museum is expected to better tell and preserve the stories of Oklahoma’s Citizen-Soldiers and Airmen. Oklahoma National Guard leadership hopes the new facility will help educate and connect with the public while recruiting and inspiring young minds.

“It’s important to share with the public the historical impact the Oklahoma National Guard has had on our state, nation and the world,” said the Adjutant General for Oklahoma, Maj. Gen. Michael. “Most importantly, we must begin sharing the sacrifices and accomplishments our Guardsmen have made since the first Gulf War.”