The Carl Albert Titans battled neighboring Del City on even terms for four quarters before falling in overtime, 53-47, Saturday in the championship showdown of the annual Titan Classic at Carl Albert. 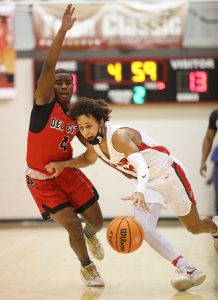 The Titans fell into a 7-0 to open the contest but battled back and finally took the lead, 17-15, on a bucket by Curtis Rose just before halftime. The two clubs were tied at halftime, 20-20, after James Locke delivered a trey.

After Maurice Cudjo downed a trey midway through the third period to knot the score at 29-29, DC jumped to a three-point bulge going into the fourth quarter.

Two free throws by Antonio Watson, who led the CA scoring parade with 15 points, with 3 minutes to play tied the score at 41-all, Watson connected on two more to put CA on top, 43-41, and following a steal by Jaden Harrell, the Titans were in good shape with the lead and possession with 2 minutes to play.

But Keyondre Young tied it for the Eagles and sent the contest into overtime. Young struck again with a traditional three-point play and the Eagles pulled away.

Cudjo had 10 points while  Rose and Locke each added 9.

THE ROAD to the championship finals of the Titan Classic was an easy one for the host CA boys as they trounced Glenpool, 81-38, in the semifinals blowout … and it could have been a lot worse.

James Locke set the stage with three treys and three free throws in the first quarter as the Titans scored 20 straight points during the middle of the period and sailed to a 30-8 advantage. Quentin Woodson and Maurice Cudjo each added five, Antonio Watson had two field goals and Jordan England left-handed a layup off a steal and a fast break.

The onslaught continued in the second quarter as Woodson downed four field goals and a pair of free throws for half of the CA total of 20 en route to a commanding 50-15 halftime margin. Locke added another treey and a field goal to give him 17 at the half, while England, Cudjo and Watson rounded out the scoring.

Locke continued his torrid scoring with two more treys to give him 6 for the night and added a couple of field goals and two free throws to give him 27 points in just over a half on the court. The Titans pushed the margin to 68-29 going into the fourth quarter.

Nick Bradley popped a three and Cudjo tossed in a free throw before the crowd got a look at the Titan future as Jay Price trotted out the CA freshmen squad which finished out the scoring.

The super-talented frosh quintet of Jaydon Mott, Quincy Hopkins, Ryan Reynolds, Mason Novotny and Hutch Russell added the final 10 points to the total, much to the delight of their older teammates, the crowd and certainly their proud families.

In addition to Locke’s 27. Woodson was also in double figures with 15 and Watson finished with 8.

FRESHMEN SPARKLE. Titan fans got a peak at the future as Coach Jay Price suited up the CA freshman team for the opening round game against Santa Fe South and the five frosh made quite an impact on the game, in which the Titans rolled to a 91-39 romp by CA.

The freshmen trio of Quincy Hopkins, Jayden Mott and Ryan Reynolds each scored six points and guards Mason Novotny and Hutch Russell orchestrated the attack and led the defensive charge during the brief appearance by the frosh.

In all, the Titans had 6 players in double figures and none saw more than a half of action as the No. 1 Titans opened defense of the tourney title they won a year ago. It was CA’s 11th straight victory of the season.

The Titans leaped out to a 12-0 lead to open the contest as Jaden Harrell led the way with a pair of field goals and a free throw and Quentin Woodson tallied three field goals and three free shots to pace a 22-point first quarter.

By the time Price sent all 16 players in the game, Woodson, James Locke and Curtis Rose each tallied 13, Jordan England had 12 while Harrell and Maurice Cudjo each tallied 11 go with the freshmen 18-point offering.