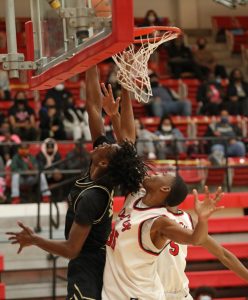 Israel Hart fueled the Bombers offensive attack with 21 points, while Keivon Hudson added 15 in the win.

No. 11-ranked Midwest City led 41-23 at halftime and continued to pull away in the second half. Ronnie Thomas scored all nine of his points in the second half, while Makale Smith hit 5 of 7 free throws in the fourth quarter.

Hart was again the top scoring option for Midwest City, scoring 25 points including 12 in the fourth quarter. The senior has scored 20 points or more in three of the last four games.

The Patriots led 53-51 at the end of the third quarter, but the Bombers rallied in the fourth. Hart picked up the load with 12 points including a pair of conventional three-point plays.

Midwest City was scheduled to play No. 7 Putnam City North on Tuesday (after press time) and will host No. 6 Choctaw on Thursday night.