Mustang’s boys claimed wins on Friday and Saturday against Moore and Yukon, respectively. 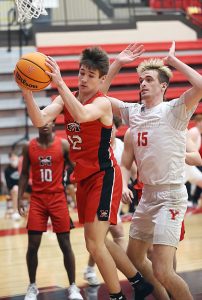 The Broncos’ 86-72 win against No. 13 Moore at home was their first win against an opponent ranked higher than them.

“We feel like we’re playing really good basketball right now,” said Mustang coach Scott Hodges. “We’ve continued to get better throughout the course of the year.”

Sophomore guard-forward Jacobe Johnson had scoring performances of 31 and 22 points against Moore and Yukon, respectively.

“First off, [Johnson] took really good shots, he took rhythm jump-shots, he attacked the rim,” Hodges said, “you know, it helps when he shot it as well as he did from three.”

“When [Johnson] hits those perimeter jump-shots, he becomes really, really hard to guard, and he did these last two games.”

Mustang had a quick turnaround against Yukon on the road Saturday as the game rivalry game tipped at 4 o’clock.

The Broncos (11-5) got out to a hot start, regardless, outscoring the Millers 38-20 through two quarters.

If Yukon had no answer for Mustang in the first half, the Millers did not even have a syllabus for the class in the second half.

Junior guard Ethan Scott, who finished with 15 points for the Broncos, scored first on back-to-back triples, the second from about four feet past the arch.

Johnson scored on the following possession, putting Mustang up 46-20.

Then Reese Strange scored on a sharp angle through stiff contact, drawing the foul as well.

Strange then assisted Johnson to score on a fast-break layup.

Then Jacob Henderson sent a Yukon shot attempt on the opposite end back towards Mustang’s goal, leading to a Johnson 3-pointer seconds later.

“When everybody’s playing well, and we’re all clicking,” Hodges said, “we feel like we’re a tough team to beat, and that’s what happened Saturday.”

Hodges credited the depth of his team for contributing during both weekend games.

“Obviously Ethan and Jacobe played well,” Hodges said, “but Reese Strange and Jacob Henderson and CJ Young stepped up, and then Austen Smith and Kaden Bogard off the bench kind of did

what they’ve been doing and just played a huge role.

“Whenever we have a game like that where everybody’s contributing, we feel like we’re going to be a hard team to beat for anybody,” Hodges said.

Hodges said the quick turnaround served as a good simulation for what’s to come in the playoffs.

“I was proud of the way we responded to that,” Hodges said.

The Broncos played Tuesday at home against ninth-ranked Norman North (after press time). They will travel to Edmond Memorial to take on the top-ranked Bulldogs.