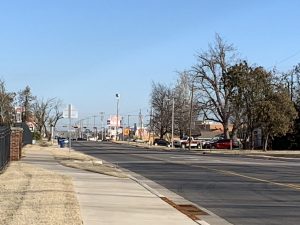 Traffic moves along widened and redeveloped South Mustang Road Tuesday. The project is complete, except for storm water system work expected to move forward in February. That will not impact drives or the roadway itself, City Manager Tim Rooney says. (Photo by Traci Chapman)

Several city road projects continue their forward momentum, as one final improvement on one of Mustang’s largest street redevelopments is in the works for February.

In February, crews would begin work on a storm water system on the northeast end of the project, City Manager Tim Rooney said in his Jan. 29 report; that work would not impact traffic or the roadway itself, he said.

Sara Road
A longtime component of the Sara Road widening project was utility relocation, which took just over a year – from September 2019 to October, Rooney said. Oklahoma Turnpike Authority, which is handling the project, was expected to begin construction in January; Mustang’s portion is one mile long and is comprised of a four-lane stretch with five-lane interchanges at section line roads.

“OTA expects to bid the project out in February,” Rooney said.

Southwest 89th Street
Once complete, the busy intersection at State Highway 4 and Southwest 89th Street will have a stoplight, something officials have advocated for, as have residents and business owners, for quite a while. That was confirmed in 2018, when City Council in September of that year approved a resolution for that signal – and for it to be part of the SW 89th Street project.

Once complete, the street will be four lanes from just east of Highway 4, west to Mustang Road.
Rooney said in his late January report utility relocation would begin early this year; a construction timeline would be determined once that relocation was complete, he said.

The East Charlotte Terrace project is in the design phase, the city manager said. Once that part is complete, officials will determine a construction timeline, likely during early 2021, on a sewer that will begin at East Charlotte and North Columbia terraces, running west on Charlotte, Rooney said.