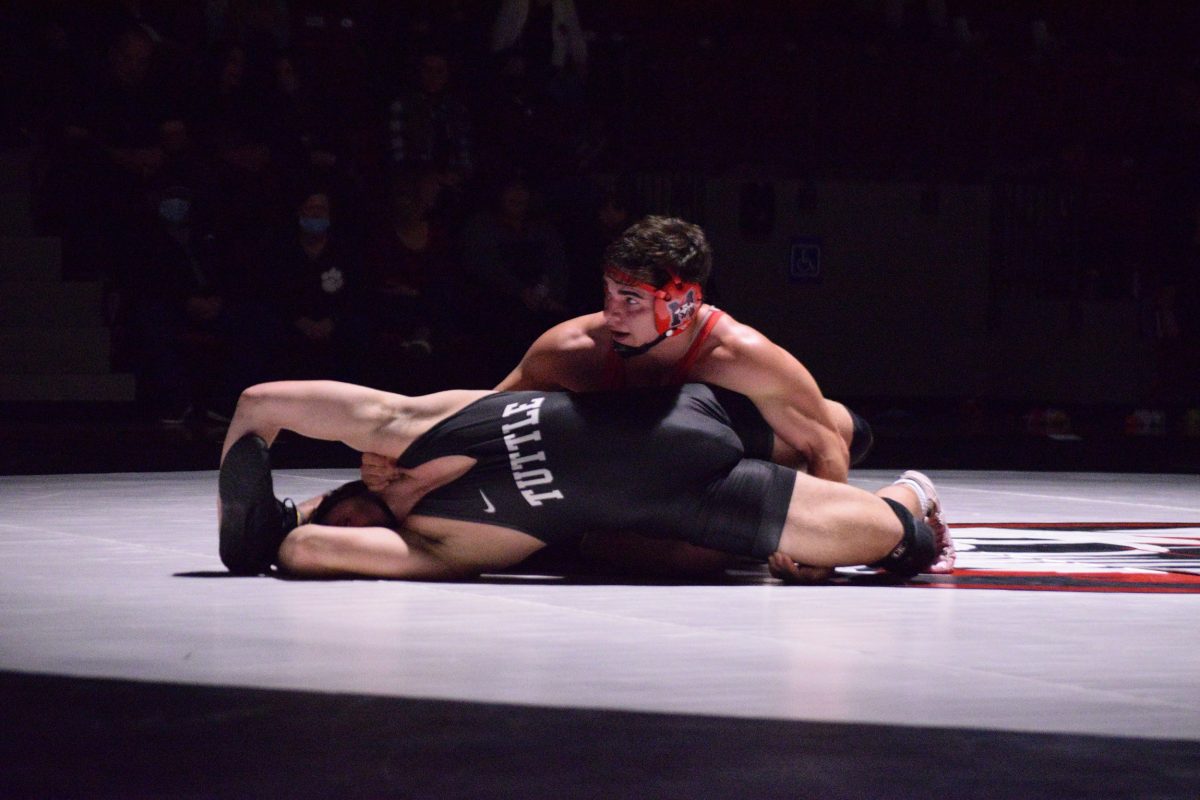 Mustang’s Brannigan Reyes controls his opponent during a dual against Tuttle on January 28, 2021. (Photo by Jarrett Standridge)

Last Thursday, the Class 6A No. 4 Broncos traveled to Tuttle to take on the Class 4A top-ranked Tigers. Mustang had no problem defeating Tuttle as they cruised to a 50-14 victory to end the regular season at 18-2.

The Broncos dominated from the very beginning of the dual as they won each of the first three matches easily. Kylar Kurtz got things started with a fall followed by another fall from Shelton Chastain. Air Force Academy signee Tucker Owens added yet another consecutive bonus point victory as he notched a 17-6 major decision win that put Mustang up 14-0 early.

Tuttle would not go down without a fight, however. After getting in the win column with a 10-0 major decision at 126 pounds, it looked as if the Tigers were going to climb back into the dual by taking the match at 132 as well. But after being down most of the match, Mustang’s Jaston Jackson was able to secure a pin to make it 20-4 Mustang.

In the most competitive match of the night, Oklahoma City University signee Keegan Luton faced off with Tuttle’s Reese Davis. It was non-stop action as both wrestlers scrambled all over the mat looking for points. After three hard-fought periods, Luton was able to come out on top with a 3-2 decision. Head Coach Brian Picklo said that the match was the best of the night.

“The 145 pound match was, I mean it was such a low scoring match but it was just non-stop wrestling. I think that was my favorite match with Keegan and Reese Davis.” said Coach Picklo.
Mustang went on to win five of the next seven matches to put the Tigers away for good. Bam West, No. 1 nationally-ranked Oklahoma signee Tate Picklo and Oklahoma City University signee Jack Kitchingham all won by fall. Oklahoma commit John Wiley added a 10-2 major decision to help Mustang to a blowout victory.

Coach Picklo was pleased with his team’s effort, especially in the closer matches.

“The close matches we won and that is always going to be the key in every single dual. There’s going to be some ones that we are going to blow them out, there’s going to be some ones where they blow us out. It’s those toss-up matches that are so crucial to beat a good team and we happened to win the toss-up matches which were great.” said Coach Picklo.
With the regular season behind them, Mustang now turns their focus to the postseason. With a big win to cap off the season, Coach Picklo feels good about where his team is at.

“I thought our kids wrestled great. It’s a good sign moving into the postseason. So, hopefully we can continue to get better and move forward and keep performing like this.” Coach Picklo said.