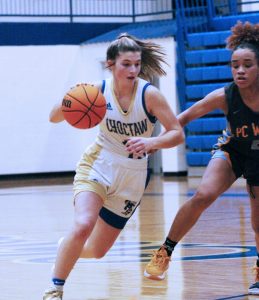 With some dominant defense the Lady Jackets secured a 47-27 win.

“Always a good night when the game plan is executed. Holding a team like that to 27 points is a special night,” said head coach Ryan Maloney. “Coming into the last week before rankings are sealed in, you have to put your best foot forward. I feel like we did that. I want to congratulate them on their defensive effort. We’re still looking to get a little sharper offensively, but if you play defense like that, you’re going to be tough to beat.”

Choctaw was happy to secure a regular season sweep of a rival that regularly joins Choctaw among the state’s elite.

“This is a big win for us. Putnam West is always a rivalry so to sweep them for the season feels nice,” said Maloney. “They’re going east so they’ll battle over there and we’ll see.”

Work inside was crucial to Choctaw’s lead, and efforts by Smith, Adams and Purifoy made the difference.

“They’re our three-headed monster down there, which has been fun. We don’t normally get to play like that,” said Maloney. “We’re typically a four-guard team, and we’re playing two post this year. It’s been different, but I’m real proud of them and it’s a lot of fun.”

In a game where Choctaw controlled the paint, Smith led in rebounds and buckets.

“Hannah was out the last time we played them, and she really stepped up on the inside. She was aggressive and looking to score. This was a special night for her,” said Maloney. “She goes 11 over her average scoring, and leads us in rebounding which is normal.”

With the win over rival Putnam West, Choctaw went on to face their biggest rival two days later.

“West, with how they’ve been, has been a big rivalry for us, but when you’re this close to Midwest City, they’re your biggest rivalry. The girls all know each other,” said Maloney. “They’re real senior heavy so we’ve seen them all before, while we’re a young and learning team. It’s always a fun one.” 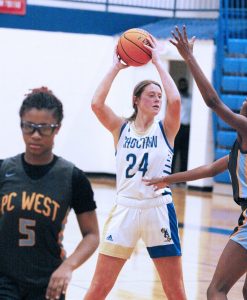 No. 4 Choctaw will rematch the No. 9-ranked Bombers Friday at Homecoming.

No. 10-ranked PC North was one of only two losses the Lady Jackets have suffered this year.

“It comes down to us, Midwest City and Putnam North to see who is going to win this conference so it’ll be fun here down the stretch,” said Maloney.
“Last time was a tough one. We had a low scoring output, but it was good to happen early. We were able to look at some things with the girls and we’re learning. We have a big mix of youngsters coming in, and they’re coming on. It’s always a process but fun and exciting to watch.”

For more photos from this game visit us on FaceBook