Valentine had a lone basket in the first quarter, he added a 3-pointer in the third and then unloaded in the fourth with 17 points.

Finishing the night with 22 points, the ninth grader hit five 3-point shots in the fourth quarter, including one that tied the game at 67 with just seconds left in regulation.

He was perfect on free-throws. 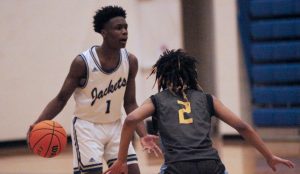 Valentine’s efforts paid off big for Choctaw as the Jackets went on to capture a one-point advantage in overtime.

“You want to win big games like that. Especially at the end of the season. State championship games are not going to be 20-point wins. Our boys needed to see the positive side of those games,” said head coach Jermain Simpson. “Our freshman came in and had a big game. Had to be his high for the season.”

The physical contest started back-and-forth, and by halftime Choctaw had taken a 32-31 lead.

LJ Gurley had 10, James Smith scored nine, Sean Franklin was at five, Raul Nunez had three, Valentine and Jeremy Greer-Taylor each had two and Isaiah Taylor added one.

However, Putnam West would rally in the third to outscore the Jackets 20-14.

Fueled by the freshman shooter, Choctaw would fight back in the fourth quarter outscoring the Patriots 21-16.

Tied at 67 Choctaw entered overtime. The Jackets would outscore Putnam West 9-8 with five points coming from the line for the 76-75 OT victory.

Franklin scored 17 on the night, Smith was credited 15 and Gurley had 14. 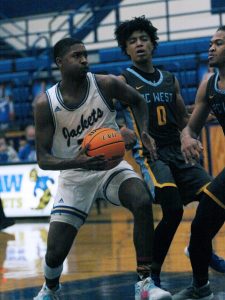 Nunez finished with five points, Greer-Taylor had a basket and Taylor scored one from the line.

“We’re sitting at No. 4 on the west side split. So, this game was huge for us with the rankings being locked in Sunday. Pushing through this week should set us up to make a push for state,” said Simpson.

Choctaw performed through the week carrying momentum into a rivalry game at Midwest City two days later. In another close contest No. 7 Choctaw dropped the No. 8-ranked Bombers, 63-62.

The rivalry game means a lot to the Choctaw program that is looking to make some history securing their spot atop the state’s elite and hosting some annual playoff games alongside the CHS girls.

Choctaw will host a rematch with the Bombers at Homecoming Feb. 12.

“When we play them again it’ll be personal pride since the playoffs locked in Sunday,” said Simpson.

For more photos from this game visit us on FaceBook