EDMOND – The Carl Albert swimmers will again be well represented at the Class 5A state swimming championships.

The girls won their third consecutive regional championship, while the boys finished runner-up at the Class 5A West Regionals last Friday at the Edmond Schools Aquatic Center.

At the regionals, Carl Albert had 18 girls and 15 boys qualify for the state meet in 21 of the 22 events. The 5A state swimming championships will be in Edmond on Feb. 22-23.

Carl Albert dominated the girls competition with 468 points. Altus was a distance second with 304, followed by Heritage Hall (169) and Duncan (155). 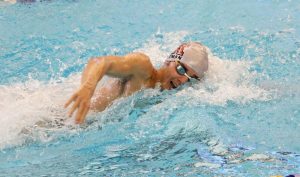 Kaleb Putman wins the 200-yard freestyle at the Class 5A West Regional meet on Feb. 5.

The Titans won the 200-yard freestyle relay and finished third in the 200 medley and 400 freestyle varieties.

Sydnee Hopgood, Rhiannon Lenz, Emily Charron and Brylee Toney finished third in the 200 medley with a time of 2:09.50.

Price and Soucie finished third and fourth, respectively, in both the 50 and 100 freestyle. 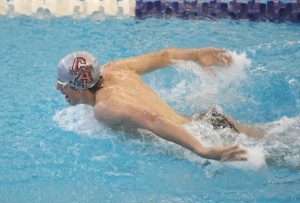 On the boys side, Carl Albert reeled in four first-place medals.

Fellow senior Max Wolfley came close to Putman’s mark. The senior won the 100 freestyle in 50.08 seconds and finished less than a second behind the leader in 50 freestyle. He also joined Putman on the winning 200 freestyle team.

Raymer was third in the 500 freestyle and fourth in the 200 freestyle. Garcia (100 backstroke), and Lam (100 breaststroke) placed fourth.

But it was not all roses for the Titans at the regional. In the first event of the day, their 200 medley relay team was disqualified due to an early takeoff. Carl Albert had the top seeded time of 1:44.42 at the regional and second overall in 5A. Altus won the relay in 1:47.15.