Officials with the U.S. Marshal’s Task Force arrested a homicide suspect at a home in Edmond on Thursday.

Around 5:30 p.m. on Thursday, the U.S. Marshal’s Task Force arrested 25-year-old Maurice McCall as he hid in a closet of an Edmond home.

Authorities say McCall is the suspect in the murder of 18-year-old Armoni Johnson.

July 15 officers responded to the area of NE 36th and Henney Road for a report of shots fired.

When police arrived, they found 18-year-old Armoni Johnson dead in a car that had crashed into a ditch.

The crime scene stretched about a mile as investigators believe Johnson died when his vehicle crashed into a concrete culvert as a result from being chased and shot at.

McCall was booked on charges of murder in the first degree, but investigators say there’s still work to be done. 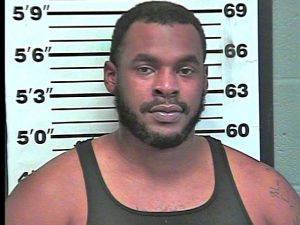 “As a small agency the assistance we received from varying agencies was key to solving this crime and bringing justice to Armoni and his family. The crime scene alone was almost a mile long.  Oklahoma County Sheriff’s Office Technical Investigators spent many hours with Choctaw Technical Investigators processing the actual crime scene and the involved vehicles. Oklahoma County Sheriff’s Office investigators Sergeant conducted countless hours of interviews along with Choctaw investigators.  Oklahoma Highway Patrol crash investigators assisted Choctaw officers with piecing together and reconstructing the vehicle crash. Special thanks to the US. Marshal’s Task Force who never gave up in finding Maurice McCall as he fled to Florida and other states to avoid these charges,” reported Choctaw Police Chief Kelly Marshall.

“There is still work to be done before presenting charges of homicide to the Oklahoma County District Attorney’s Office.  The Choctaw Police Department is awaiting DNA results to determine if charges may be presented on other potential suspects.”