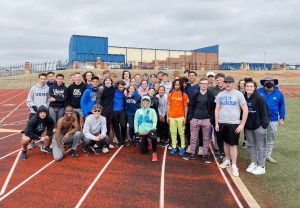 Shanna Sears, of Choctaw, had a goal of running 100 miles while meeting and running alongside community members and also raising funds for the local EOCRC nonprofit.

After 22 hours and 18 different stops throughout eastern Oklahoma County Sears put an end to her run as she suffered from severe foot pain.

She went 80 miles stopping at a variety of churches, schools and businesses along the way. 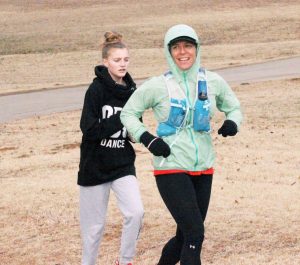 Shanna Sears makes her way through Choctaw Creek Park as other runners join in along the way. (PHOTO BY RYAN HORTON)

“Of course, I’m disappointed, but also so thankful for all the support I’ve gotten all day long not just for me but also for the Eastern Oklahoma County Resource Center,” said Sears. “I’m grateful, thankful and proud of our community for coming together.”

She made several brief stops throughout the area during her run to collect donations, meet supporters, encourage runners and thank citizens for supporting the EOCRC.

“This fundraiser is to highlight the amazing churches and businesses that are already investing in our community and helping to change lives for the better. We want to raise as much money as possible so that the EOCRC can be fully functional and have a centralized location to help empower the people in our community,” said Sears.

EOCRC’s mission is to minister to the physical, emotional, and spiritual needs of those hurting across eastern Oklahoma County by feeding the hungry while eliminating its causes. 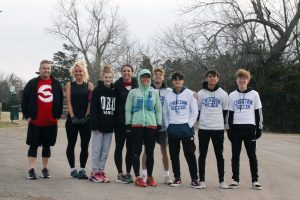 Shanna Sears makes her way through Choctaw Creek Park as other runners join in along the way. Choctaw High School’s soccer team was among those runners. (PHOTO BY RYAN HORTON)