Midwest City voters will again be asked to weigh in on a proposed police and fire training facility. 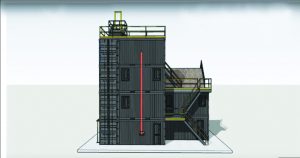 Midwest City is asking voters to approve a $5.7 million bond issue to build a police and fire training center on property near the Public Works Department on SE 15th St. (Image provided)

The city council last week approved putting a $5.7 million bond proposal on the May 11 ballot. The bond proposal would require a majority vote.

The city plans to build the facility on property near the Public Works Department on SE 15th St. Under the proposal, the bonds would be paid off within 25 years with an interest rate not to exceed 10%.

“We pulled this project for a number of reasons and now we’ve taken a look back at it and the staff has picked a new site for it,” said Mayor Matt Dukes.

Voters approved plans for a police and fire training facility as part of a $53 million general obligation bond issue that passed in 2018. The four-part bond issue had separate proposals for streets, water system, parks and recreation and public safety.

Two years later, the city scrapped the project after officials learned that the location was incorrectly stated on a bond election ballot. The city planned to build the police and fire training facility in the 9500 block of SE 15th St., in the east end of what is now the Fred Myers Baseball Complex. City staff determined that the correct address for that site is the 9700 block of SE 15th Street.
Citizens also expressed concerns about the project’s proximity to neighborhoods and the impact of smoke from live burn training exercises.

The proposed facility consists of a building with classroom space and a four-story burn building/tactical training facility to be shared by police and firefighters. The firefighters would use the facility to conduct controlled burn exercises and regular training. Police can use the building for regular technical training including SWAT, hostage and active shooter drills.
The building would be constructed of metal shipping containers and the interior spaces can be reconfigured to simulate living spaces.