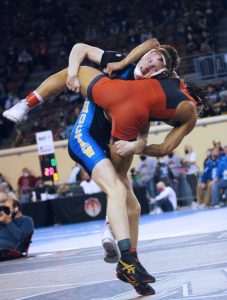 Holman suffered a 3-2 sudden victory loss in his final match with Putnam City’s Kalib Nolan when he gave up a point to an illegal hold.

The loss was more heartbreaking as Holman opened the tourney with a 9-2 decision over Nolan before he made his way back through the consolation bracket. 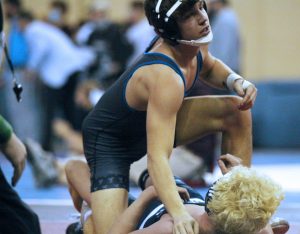 He only gave up one match. A 10-5 semifinal decision to state champion Cael Hughes out of Stillwater.

Walden had a tech fall and major decision on his way to bronze. 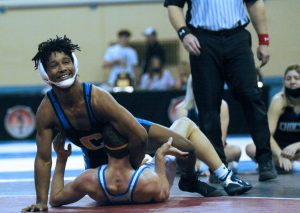 Muse only lost one match when he took state champion Zac Blankenship, of Bixby, to a semifinal 3-2 TB decision.

He capped his tourney with a fall over Stillwater’s Cade Nicholas. 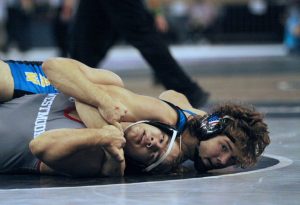 Choctaw’s Zeke Coleman works for a win at state. (PHOTO BY RYAN HORTON)

Coleman took a 1-0 decision over Yukon’s Conner Columbus in his final match.

Coleman had three pins in the tourney, but suffered a 5-3 sudden victory loss to Bixby’s Jack Puckett in the quarterfinal. 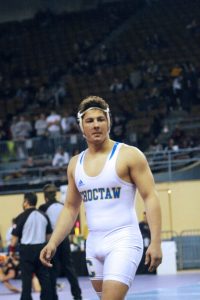 He had a back-and-forth final match with Edmond North’s Ricky Thomas before he was caught giving up the fall.

In the previous match he had pinned Broken Arrow’s Elijah Hynes. He claimed a pair of decisions in the tourney, but had dropped a quarterfinal match with state champion Jersey Robb of Bixby.

In the consolation round, Garrett McChesney, of Deer Creek, outscored Hanna, 5-3. 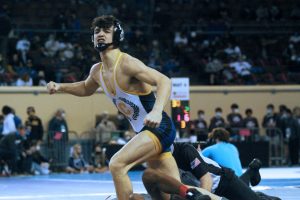 However, he dropped two matches to the state runner-up and then the fourth-place wrestler.

In Thursday’s final she took a 7-3 decision over Pawhuska senior Landon McCartney (12-2) to take gold.

Hand won by fall over Aralease Callahan, of Broken Arrow, to open the state tourney.

Then in the semifinal, she took a 1-0 decision over Daityn Webb, of Davis. 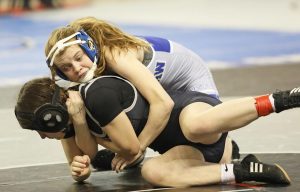 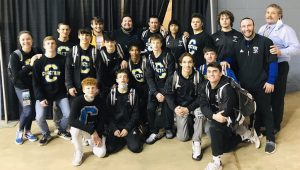