Jones has been the Eagles defensive coordinator for the past four seasons. He also serves as head strength and conditioning coach and boys track coach.

The Mid-Del School Board approved the promotion Monday at their monthly meeting. 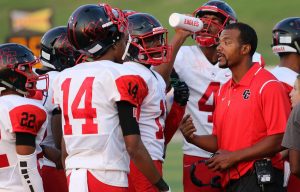 Mike Dunn, who is the former Del City coach, spoke glowingly of Jones.

“I’m very excited that Del City will be in such good hands with Robert Jones,” said Dunn, who has coached with Jones for more than a decade. “He’s been there every step of the way the last four years and has not only been a big part of the development of the football program but the overall athletic department.”

Jones in his 16th year of coaching with most spent in Texas. Prior to his return to Oklahoma, Jones served various coaching roles at Brewer High School during his three-year tenure including secondary, head strength and conditioning, head boys track, and co-defensive coordinator. He previously coached at Saginaw High School, Los Fresnos High School, College Station High School and Rockdale High School.

He attended Carl Albert, where he highlighted his athletic career with two football state championships and three state championships in track and field. Jones started his collegiate career at Northeastern A&M Junior College where he was a Junior College All American. Jones went on to finish his collegiate playing career at Oklahoma State University where he was a starting cornerback for two years and made the Academic All-Big 12 and second All-Big 12 football teams.

Jones earned his bachelor’s degree in sociology from Oklahoma State University in 2000.

He says he is happy to be back home with his family and supportive community and is looking forward to a successful season with the Eagles.