The EOC Basketball League hosted a postseason invitational over the weekend with 95 teams competing over three days at five different schools throughout eastern Oklahoma County.

A year of scheduling complications, from the ongoing COVID-19 pandemic as well as record low temperatures, came to an end as the area little league volunteers hosted some “March Madness.”

“It’s taken some miracle work on the part of coordinators to get some games in this year,” said first year Indian Meridian (Choctaw) Basketball Association President, Bryan York. “The idea is start practice around October, and play games around Christmas break until the end of February. You have a postseason tournament, and you’re done. Obviously, this year is a little different.”

The associations are separate entities from the public-school districts, and rent access to facilities to practice and compete. Normally, teams have two nights a week to practice and meet Saturday to compete head-to-head. 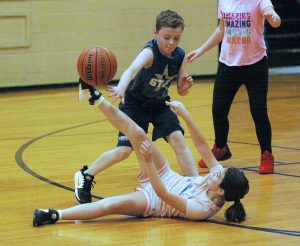 Competition was fierce as some EOC players got in some co-ed scrimmages in preparation of a postseason tournament. (PHOTO BY RYAN HORTON)

Coordinators believe in the importance of life lessons and skills learned through participating in youth athletics, so the season went on with many modifications due to safety concerns.

“We started late. We opened the gyms as much as we could, but didn’t really start practice until mid to late December, and we decided that really wasn’t enough practice to start games. So, we pushed the games back until Jan. 9, and went eight weeks instead of 10. At that time, we decided no playoffs. Eight straight weeks of games and then a couple teams here and there had to miss out due to quarantine. One particular weekend we had 13 teams out. Either one of their players had COVID or was exposed or the team was exposed in the previous week’s game. We did a lot of shuffling trying to reschedule teams that missed games, and eventually we got to the end,” explained York.

“We set COVID guidelines. People really did a good job following protocols. Every association did it a little different with entry and exit points, but we all agreed to limit games to 45 minutes. A lot of volunteers work hard to run the gyms and make sure games went well. They really had their work cut out for them this year. Everything was different because of COVID, and then the snow came. Record low temperatures caused us to cancel two more weekends, because pipes started busting and the schools were all damaged.”

With athletes from kindergarten up until sixth grade, EOC Basketball League helps many athletes develop skills needed to compete on middle school and high school rosters, but more often serves as the only court time young athletes will ever get.

“Just like it being tough on those college seniors that lose their last season. It would have been really tough on our sixth graders. Especially the ones that won’t make a middle school team or might not even go out for the school team,” said York. “The schools are really good to us. There were times the schools went virtual, but they still let us practice in their gyms. That’s a big deal for these teams.” 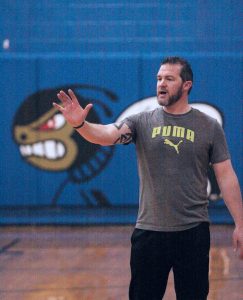 Coordinators were happy to conclude the season with a full tournament allowing local youngsters an opportunity to take the court a couple final times.

Countless hours of hard work from dedicated volunteers culminated in nearly a 100 local youth basketball teams capping their season this past weekend.

“We knew we didn’t have postseason going into this year. But a few of us really wanted to do an invitational tournament. We put it out there, and had 40 teams,” said York. “Then the two weekends were taken away from teams due to snow and suddenly we have 95 teams wanting to play. Now we’re running five gyms Friday night until Sunday night. Some of these coordinators were working over 30 hours just this weekend, but we’re really excited about it.”