Jones fans are excited to experience a little Deja Vu as the Lady Longhorns have punched their ticket to state.

Jones High School has captured the area title with a win over Kingston, and is now prepared to make their first state tournament appearance…again.

A year ago, Jones High School claimed the Area Championship with a win over Kingston, and the Lady Longhorns earned a trip to the state tournament for the first time ever.

The doors were locked before the Lady Longhorns arrived at the Big House. COVID-19 precautions canceled the Class 3A 2020 state tourney.

Friday No. 2-ranked JHS repeated history punching their ticket to state again with another area win over Kingston, 66-30. 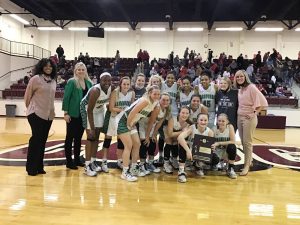 The Jones Lady Longhorns have been there before. Just last year, in fact.

The 2020 Lady Longhorns blitzed their way through district, regional and area tournaments, grabbed the No. 1 ranking along the way, and were literally ready to enjoy a joyous sendoff by students at JHS and the townspeople of Jones when the OSSAA edict came down that the State Basketball Tournaments had been cancelled for all classes.

Class A and B boys and girls had played their championship games the week before at the Big House.

So now, it’s 2021 and the Lady Longhorns have blitzed their way through district, regional and area tournaments (defeated No. 8 Kingston, 66-30 in the Area finals!!!) and have lost only one game, had several COVID cancellations and are ranked No. 2 behind undefeated Roland.
And they are ready to get on the bus Wednesday, enjoy the support of the students, teachers and townspeople and journey to the Big House to play No. 14-ranked Hugo (15-9) at 8:30 p.m.in Class

COVID-enforced time changes schedule shows semifinals on Friday at Noble at 6 p.m. where the Lady Longhorns (with a first-round victory) will face the winner of No. 3 Lincoln Christian (20-4) and No. 6 Perry (21-5).

THE LADY LONGHORNS were hardly tested in the preliminary rounds to reach the State Tournament beginning with play everybody (a lot!!!) 108-19 victory over Lexington in the opening round of district play.

That was followed by regional action wins over Christian Heritage, 68-21, and Marlow, 55-19, before the laugher against Kingston to grab a state berth.

JONES BOYS fell one game short of a berth in the state tournament, falling in the Area finals to Kingston by a 50-40 count.

The Longhorns enjoyed the homecourt advantage in district play as they easily disposed of Lexington by a 79-36 count before being dropped into consolation action, battling a rugged Christian Heritage team to the wire before losing a 51-47 heartbreaker.

In area play, the Longhorns posted back to back wins over Comanche, 59-43, and No. 20 Washington, 57-54, before the season-ending loss to Kingston.