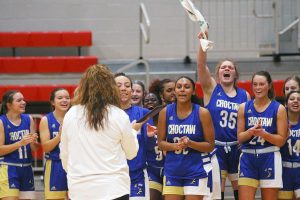 There’s no doubt Thursday’s area final between No. 4 Choctaw and No. 5-ranked Mustang was a championship matchup.

The top-tier programs tied in four quarters before the Lady Yellowjackets finally edged out Mustang in overtime to claim a Class 6A Area Championship and advance to the state tournament.

Mustang repeatedly took a lead, but Choctaw showed they’re no strangers to high-pressure games and closed the gap by the end of each and every quarter.

All four quarters of regulation play resulted in 11 points per team.

After entering overtime tied 44-44, Choctaw finally got a lead and was able to hang on until the celebration began.

Hannah Smith led Choctaw with 18 points, senior Trinity Gooden scored 16, Mya Purifoy had 11, Carley Gasaway had a pair of 3-pointers and one form the line, Raven Jackson had four points, 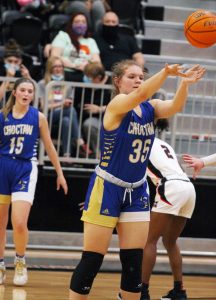 Purifoy scored six in OT, including four free-throws, Gooden put up three in the final minutes, including her eighth from the line, Smith added a basket and Gasaway got one from the line.

“That was finally nice when we got a 6-point lead and could finally relax a little bit. The was an unbelievable ball game,” said Choctaw head coach Ryan Maloney.
“We had three bad quarters, but were able to at least break even with them. We had to do what we had to do. It was a gut check, but when we make free-throws down the stretch, we get it done.

Mya stepped up and made a couple big one and Trinity is always making big ones.”

The Lady Broncos were led by Karley Johnson who scored 18 on the night. 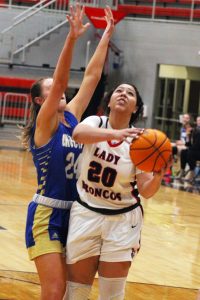 Karley Johnson looks for a basket against Choctaw. (PHOTO BY RYAN HORTON)

Choctaw punched their ticket to the area final by claiming the school’s eighth straight regional title.

This is the fourth area championship and seventh trip to state under Maloney.

The Lady Jackets are excited they don’t have to work through the bottom of the area bracket this time.

“It’s exciting. First area championship in five years. We’ve been going through the backside for a while and now we get to sit out Saturday and have a good time,” said Maloney.

Meanwhile, Mustang had to face No. 8 Moore Saturday.

Moore was coming off a 52-48 area win over Edmond Santa Fe, but the Lady Broncos bounced back with a 66-39 win in the consolation final.

Now Choctaw will open the state tourney vs. Bixby at Sapulpa Thursday at 4 p.m. the winner will face the victor of Edmond North and Putnam City North, Friday at 2 p.m. The best team of those matchups will advance to the state final Saturday at 11:30 a.m. in the Mabee Center.

On the other side of the state bracket, Thursday Mustang will open vs. Union at 2 p.m., while Midwest City will faceoff with Norman at 6 p.m. in Sapulpa. 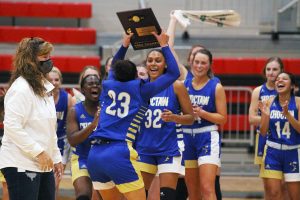