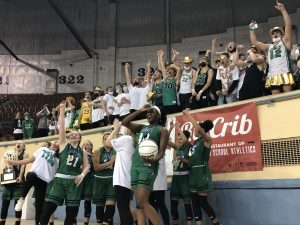 Oklahoma Class 3A girls basketball coaches might want to rethink their ballot after the No. 2 Jones Lady Longhorns had no difficulty whatsoever disposing of previously undefeated and No. 1 ranked Roland, 63-28, in the OSSAA State Championship at the Big House Saturday night.

That’s a 35-point whipping if you are having trouble with the math.

And that doesn’t begin to count the emotional baggage that Jenni Holbrook and her Ladies dumped off with an overpowering march through the State Tournament field, whipping their three foes by an average of 25 points. 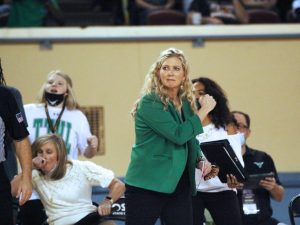 Jones head coach Jenni Holbrook celebrates as her Lady Longhorns dominate their way through the Class 3A State Tournament. (PHOTO BY RYAN HORTON)

The travails of the past two seasons are well documented.

A year ago, the Lady Longhorns were clearly the cream of the crop, ranked No. 1 in Class 3A and an odds-on favorite to capture the first gold ball or State Championship of any kind for a girls program at Jones.

Holbrook led her talented crew to the water but they couldn’t drink as the OSSAA cancelled the 2020 State Tournament just hours prior to the scheduled tip-off because of the rapid spread of the COVID-19.

Control is a mild word to describe what the scrappy Longhorns’ defense accomplished Saturday night, holding the No. 1 team in the state to two field goals and six free throws in the first half while banging out a 16-0 run in the second quarter to wrap it up early.

It was a proud moment for all of Longhorn Country.

But it was not a smooth ride.

“It was almost adding insult to injury when things got even worse this year,” said Holbrook. “We missed school, we had players out with the virus, players exposed to the virus, coaches in and out with the virus and there were quarantines, we couldn’t practice. It was frustrating to say the least,” she added.

Then the Lady Longhorns didn’t get to play in the prestigious Tournament of Champions during the holidays; in fact, didn’t even have a game prior to the Christmas break.
Then came to loss to Holland Hall in the Bethany Tournament in their second game of the season.

MOMENTUM gathered, however, and the Jones Wrecking Crew marched to 17 straight victories including a dominant march through district, regional and area tournaments before swatting away the challenges at State. 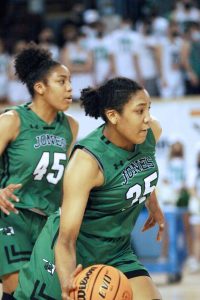 The Moore sisters, Trinity (35) and Tirzah (45), take the court for Jones during the 2021 State Tournament at the Fairgrounds. (PHOTO BY RYAN HORTON)

But there was always the specter of Roland, located almost in Eastern Oklahoma very close to the Arkansas border, sitting atop the rankings and with a victory over 4A State runnerup Fort Gibson to their credit.

It’s not too early to talk about next year, especially with super sophomore Zoe Tucker burning the Big House nets for 25 points, grabbing 6 rebounds and 3 steals in the championship showdown and fellow soph Boston Berry scoring 12 and grabbing 9 rebounds.

The first trip to the Big House resulted in a 66-33 pasting of Hugo as the Moore Twins gladdened the hearts of the Jones faithful as well as their ORU coaches-to-be. Tirzah had 27 points and 14 rebounds while sister Trinity tossed in 15 points and 12 rebounds.

They were joined in the scoring parade by Jaelyn Maples with 12, Zoe Tucker with five, three from Katie Davis and two each by Boston Berry and Sofi Woodson.

The change of venue for the semifinals didn’t slow down the Jones Express as Tirzah dumped in 31 in the 76-68 showdown with Lincoln Christian in the spanking new gym at Noble. Trinity and soph Boston Berry each added 17, Audrey Bain and Zoe Tucker each had 5 and Jaelyn Maples added a free throw.

Then came the championship game. 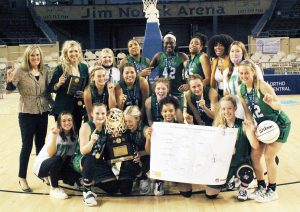 Jones celebrates claiming the Class 3A State Championship. The Lady Longhorns are now undefeated at the state tournament. (PHOTO BY RYAN HORTON)