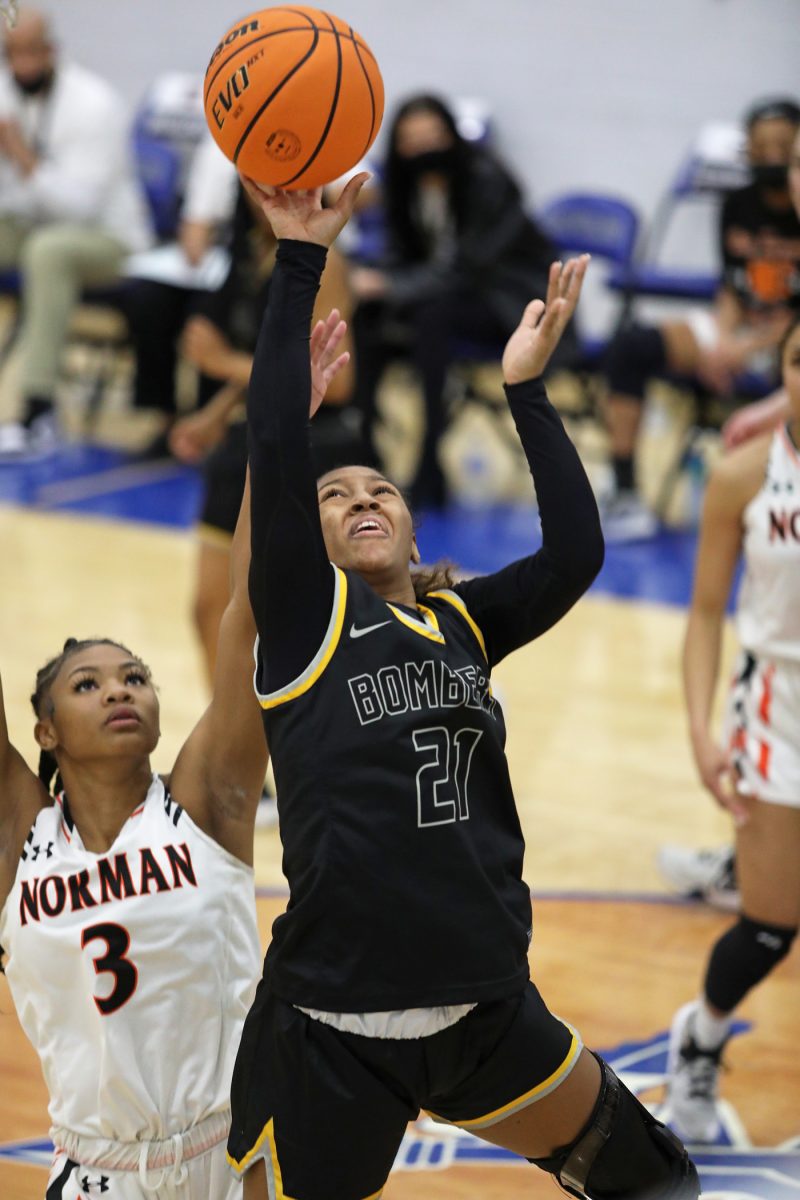 SAPULPA – The Midwest City girls had a tough draw in the Class 6A basketball state tournament as they faced top-ranked Norman in the first round last Thursday.

Despite a relentless effort, the Bombers couldn’t pull off the upset and lost 53-40.

“Our game at state didn’t go as planned, but I am beyond proud of my young ladies and how we never gave up until the last buzzer,” said coach Megan Maloy. “I am sad that my seniors didn’t get the result they wanted but they had a very successful year making it to the state tournament for the first time and they should be very proud of themselves.”

Kennedi Grant scored 16 points to lead the Bombers. Taniya Looney had 9 in the loss.

Midwest City kept thing close early in the game as they trailed 12-8 at the end of the first. Norman picked up the pace in the second for a 27-16 lead.

The Tigers continued to pull away in the third, outscoring Midwest City 10 points for a 44-23 lead heading to the fourth.

Midwest City rallied in the fourth with 17 points but couldn’t close the gap. Grant scored seven in the final eight minutes of action.

The outcome of the game was overshadowed by racists and vulgar comments made during an online video broadcast. Matt Rowan, who called the game for the NFHS Network, used a racial slur while making comments about Norman players taking a knee during the national anthem.

Before using the slur on the call, Rowan said the broadcast would return after the national anthem and believed his microphone was off. The announcer said, “F—them. I hope they lose,” after seeing the Norman players take a knee in unison as the song began. “C’mon Midwest City. They’re gonna kneel like that? Hell no… F—n—–s.”

The incident sparked outrage in Oklahoma and across the country.

Mid-Del Superintendent Rick Cobb condemned the racists comments and said he hoped the OSSAA would remove NFHS from the rest of the tournament and review any future contracts with the state.

“Language of this kind is an affront to the lessons we try to teach our students and the kind of world in which we all want to live,” he said.

Maloy called the racists comments “disturbing and disgusting” and said she is proud of the way the Norman players handled the situation.

“It makes me sick to hear that a grown man who is in sports broadcasting would not only use those racist comments in general but to use those comments against young ladies in high school who worked so hard to get to the state tournament,” she said. “Instead of giving these high school girls credit for all of their accomplishments they are discriminated during our National Anthem. I hope people in Oklahoma and throughout the U.S. see this and really take steps to change because this behavior unacceptable.”

“I will state I suffer Type 1 Diabetes and during the game my sugar was spiking,” Rowan said. “While not excusing my remarks, it is not unusual when my sugar spikes that I become disoriented and often say things that are not appropriate as well as hurtful.”

Norman went on to beat Tulsa Union and Bixby to win their second straight state championship.