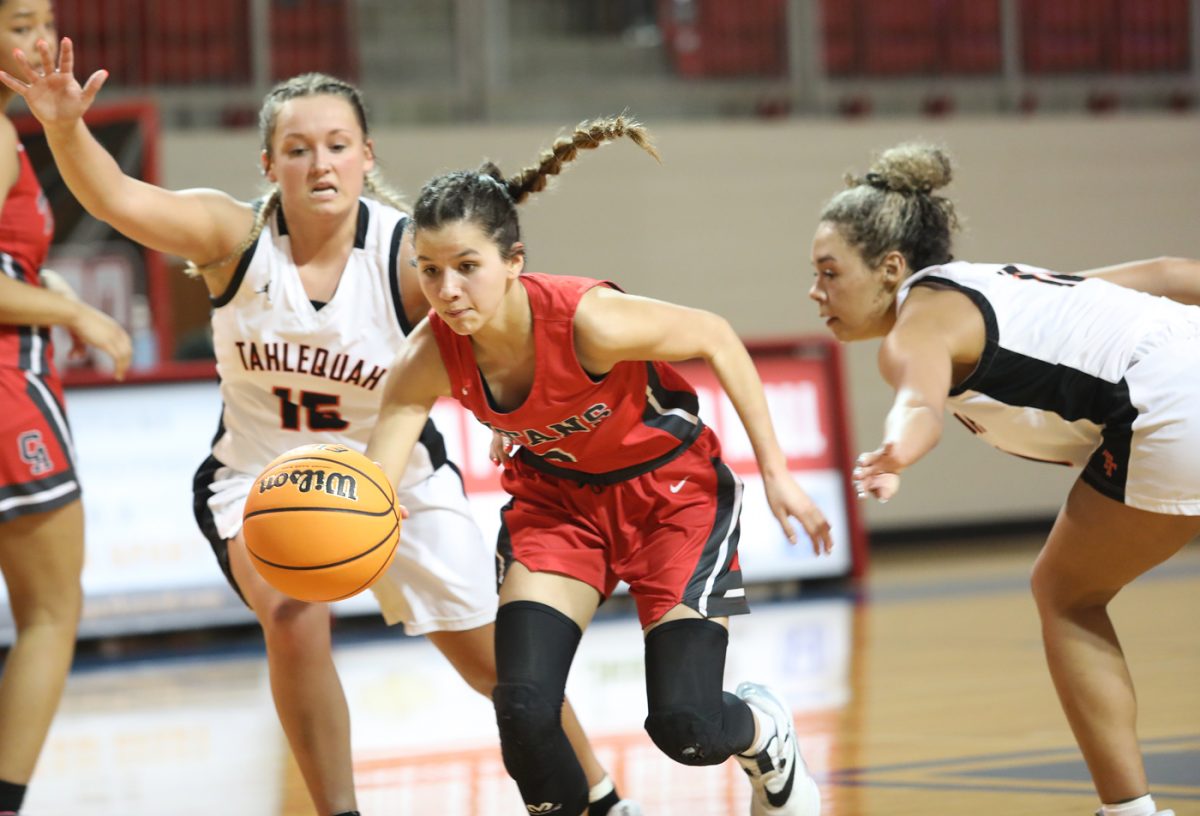 Carl Albert’s Arianna Diaz dribbles past a pair of Tahlequah defenders during the Class 5A girls state basketball tournament. (Photo by Jeff Harrison)

TULSA – The Carl Albert girls chased but could never catch Tahlequah last Thursday in the opening round of the Class 5A state tournament.

The Titans narrowed the deficit to three points on several occasions, but the No. 2-ranked Tigers prevailed with a 63-47 win at Tulsa Memorial High School.

“We just never could get it tied or take the lead and put the pressure back on them,” said Carl Albert coach Kyle Richey. “Our girls played their hearts out, but it just wouldn’t fall our way.”

Carl Albert fell behind by double digits early in the fourth quarter before making one final push. They used a 12-4 run to make it a one-score game. Azya Poole capped the run with a 3-pointer making it a 46-43 score with 6 minutes remaining.

Tahlequah stamped out the Titans comeback bid with baskets in the paint and free throws. They went 8 of 10 at the foul line in the fourth quarter.

Carl Albert kept things close in the first half. They trailed by two at the end of the first quarter and went to the locker room down 27-20 at halftime.

Tahlequah beat Piedmont in the state semifinals and later lost to Sapulpa in the championship.

Richey said he’s been impressed with the team’s steady development over the past few seasons. They were one win away from the state tournament last year after losing in the area round. This year, they bounced back from a loss to Lawton MacArthur in the area championship to earn their first trip to state since 2016.

“The girls trusted the process and this year we made it to state,” he said. “Our program is headed in the right direction.”

The Titans will lose seniors Janya Threatt, Aerin Talley and TC Traylor, but return eight players from the varsity team. Threatt missed much of the season with injury. Talley and Traylor were both key contributors this season.

“Aerin Talley and TC Traylor were unbelievable for us this year,” Richey said. “Every night they had to guard the other team’s biggest players and they did a great job.”